THIS Is MY Body - Lesson To Invaders


The title "This Is My Body" originally came to me as an erotic poem idea. But it was incited by seeing a former playmate of mine playing in a backroom with anyone who seemed willing to fuck and be fucked by him. More so the latter. Since my writings have long made it clear that value my body enough to need more than just my constant horniness to give my body to someone, I started working in my head a poem with the scenario of me presenting my body to my playmate or lover. Making it clear them that person that my presenting my body to those was not in the empty vein of that former playmate.

The first couple of lines came to me, but they started to turn. So the original sexy poem are going to be delayed for a bit. For the lyrics became ones telling someone to respect how because it is my body that I have the right to say "No! No, I do not want you".

This was because in that same night, a light-skinned Latino came up to me, and touched my chest. Initially, he was not bad-looking, but something in his energy made me uninterested. And it soon became evident as to what exactly was off-kilt in his energy.

For due to that bad vibe, I calmly moved his hand. Instead of him allowing the reality of how "No means no the 1st time", he touched me again. I felt my porn-induced PTSD being on the verge of a more violent reaction, so I started to walk away. As I was doing so, he added pinching my nipple to the unwanted touch.

We exchanged some words after. One of which led to me calling him a "socially retarded faggot". So evidently, I foresaw the potential for this behavior early on. So much so that it was in his aura. Hence how his initially being "not bad-looking" turned to being officially bad-looking.

I was already starting to work on the above video, but another incident happened just a few days later that made me need to put a rush on publicly releasing these emotions.

I was an at underwear party, and saw someone there who basically sexually assaulted me about 4 years ago. It is quite evident that his obsession with me and social ineptitude has not changed. I wrote a Facebook post the day after telling of one of the previous instances and the most recent. The most recent is what is told in the following excerpt:

This recent incident, I was being a voyeur to the action in the bathroom. I felt a body up against me. Then an unknown penis against my butt. I turned and saw it was him. When I moved to get away from him, he tried matching my position to block me from leaving. I was traumatized for a moment because it made me relive that last confrontation with him those years ago - ending with me throwing him against the wall.

If this is how this person behaves, I'm sure there are indicators of such social ineptitude from him in other spaces. For there is no doubt in my mind that THIS GUY IS A RAPIST.

What saved me was me being sober, and in a space where I was not alone. So I feel sorry for anyone who has been alone with that guy. But even more so, I must question the judgement of the person who brought him there.

This is a shame because such behavior is why people who would like to venture to these sex positive and sexually permissive spaces do not. And if such people do patronize the space, they cackle like hens hating on everyone who does partake of what the space/event offers. Even if those partaking are doing so showing respect for themselves, their partners, and their fellow patrons.

For all of this to stop, (as stated in a post on my Pied Piper of Sex page) we first must live our lives, especially our sex lives, denouncing the rules instilled in us based on body type, color, ethnicity, religion, and sexual orientation. But until we get on the same page with that and beyond, whenever someone approaches us with unwanted advances, we will always have the right to say, "NO. FOR THIS IS MY BODY!" 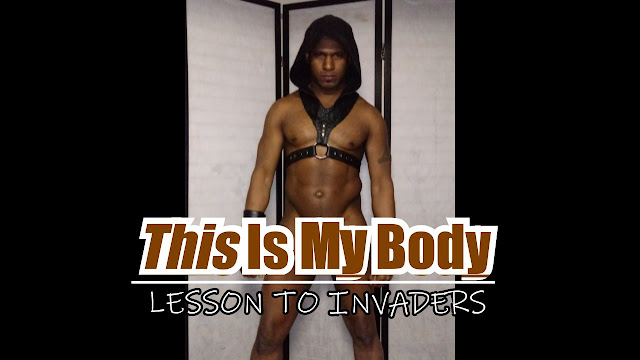 Posted by LeNair Xavier at 1:54 PM