Open Letter To A Jealous Cunt From The Cock

The other night at The Cock, I ran into a guy I've made out with a couple of times before there. He told me that after our last meeting, a guy that he had never met before came up to him right after I left and said to him, "That guy you were with... He has AIDS."

So the following is my open letter response to whomever this guy is who said that about me...

Dear Jealous Cunt From The Cock,

I understand you told a playmate of mine that I have AIDS. To correct you, I do not have AIDS. I am HIV+. And to top it off, I am undetectable, and have been for a number of years now. So I am untrasmittable, and probably much to your chagrin, nowhere near death due to HIV, AIDS, or any other disease for that matter. For also probably much to your chagrin, I am in great health.

Perhaps you said that I had AIDS without knowing about my publicly revealing my HIV+ status. If such is the case, then you're just an envious asshole.

However, if you did tell that lie because of coming across my online revelation, then you're not only an asshole. You're also a fucking idiot.

For like I said, I publicly revealed my HIV+ status already. I uploaded a video to my Vimeo, then shared it via my Facebook & Twitter, posted a snippet on my Instagram account, wrote a post about that revelation on my blog, and recently made it an ongoing series with an article on KinksterMag. So even if I didn't tell him about my status at that time, which I did not, I had already put it in enough places online that it was only a matter of time before he found out. Whether by my revealing it to him directly, or his discovering it by chance.

With that said, I must say THANK YOU.

For you maliciousness gave me the opportunity to reveal to him the truth of my status. The reason I hadn't said anything to him thus far about my being HIV+ is because for me, one of the gifts of being undetectable is that my HIV+ status is no longer on the forefront of my mind in my social meetings. I take my medication everyday, and it is no longer a weight weighing on my mind. I drink, but don't get drunk. Nor do I do do drugs. So I am not doing anything that can be counterproductive to my HIV treatment.

That is why as I turn 48 this Sunday, I can look this good, and be healthier than many 20 and 30-somethings who drink excessively and do drugs. Here is a recent picture to remind you: 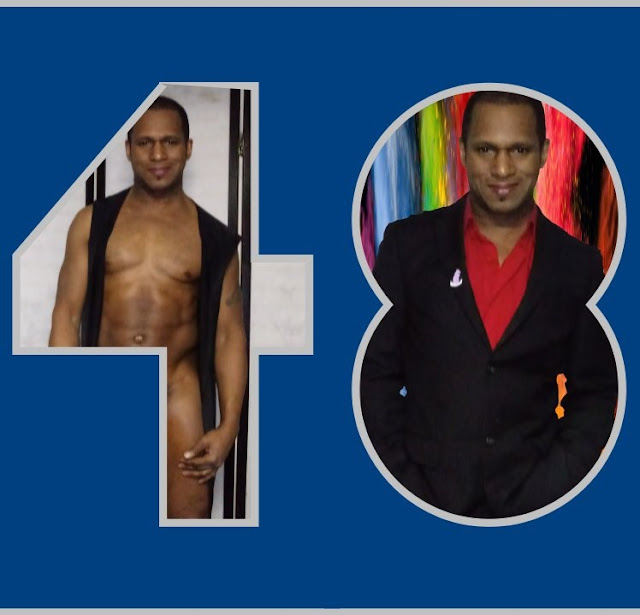 Now, the ignorance and internal ugliness that it took for you to make such a statement about me to a stranger makes one question if you can say the same as I about your alcohol and/or drug intake. Were you drunk? Were you high?

Actually,... who gives a fuck?! Whether you are substance-free of not, your action was a clear display of your ENVY. Your UGLY SOUL. You being CUNTy.

Whether you were lusting for me, or lusting for my playmate, you lost your shot at both. For if you at some point wanted me, this has definitely sealed your fate that there will never be a "we" between you and me. And my playmate's reaction to your actions shows he has no interest in you either.

Hence why FYI -  He and I are still cool.

So next time you want to try a move like this, I strongly advise you to not only get your facts straight. But make sure I never learn who you are.

The only thing saving you from being put on blast with photos and links to your social media now is the fact that my playmate did not point you out to me. And I think he's nice enough not to. But if he ever does, you had better pray that I don't know you well enough by name and/or face. Otherwise, everyone will know by name how hideous you are on the inside, which in many's eyes will make its way to the outside. That is if it hasn't already.

So your best bet to avoid a more public well-deserved public shaming that this open letter is show yourself, and come to me like a man with an honest apology. Have a good day.
Posted by LeNair Xavier at 7:56 PM