I always knew the day of me going public with my HIV+ status would come. My original plan was to come forward with it within in the pages of my autobiography that I have long been working on. But at the rate I’m going, scientist might actually find a cure by then, which would make not much need for the revelation.

The thought to come forward with this revelation came when I got an invitation for Vladimir Rios’ exhibit of “I Still Remember” to be held at his gallery La Via Galerie in Livingston, NJ on World AIDS Day, December 1, 2018. I was one of the models in the photo narrative. The invitation also offered some guests to speak. Upon reading this, a conversation with myself started. It said:

The idea of going public with my HIV status is not a new one for me. It is actually been a thought of mine for a long time. What might have caused a postponement was a potential playmate being a know-it-all.

He was someone I met at a condom-only party. We made out, I went down on him, giving him a mind-blowing blowjob, then we cuddled and chatted in the afterglow. During that conversation, I mentioned my day job and my being a sex educator via my blogging, which piqued his interest even more. We exchanged numbers to hook up one-on-one, then one night, we chatted via text. He said that outside that condom-only sex party that he liked to play raw, so he wanted to know my HIV status. I told him the truths of how 1)the joy of playing raw was mutual, and; 2)that my being positive, but undetectable. After disclosing my HIV status, I confided in him that I often considered going public with my HIV status.

Well, I have always said that my brain works like a both a male and a female's. Confiding in him with my thinking about coming out publicly with my HIV status was my female thinking, as females just tend to vent, and not necessarily seeking a solution. The male thinking is what this guy did. He considered my venting as an ask of "What should I do?", when even if I was seeking advice, the right thing to do was to recluse himself from giving it because he was in no position to offer a suggestion.

For he was HIV-. Therefore, he has no first-person experience as to what I have to consider by publicly coming out as HIV+. The most he may have ever done is watch someone else’s life from the outside looking in. And coming out as HIV+ is very much like the coming out as gay, bisexual, pansexual, transgender, etc. An outsider can demand that you be honest with yourself, but they cannot by any means so much as suggest when you tell such a truth about yourself to the outside world. Especially, if you’re a public persona on even the smallest level.

Well, for the record, that hook-up outside of that party never happened. It was not because of his suggesting that I come out publicly. Although, it should have been the 1st sign of his being a know-it-all who talks too much as all know-it-alls do. It was about something else completely in which he unjustifiably showed himself to be a know-it-all. Therefore, an annoyance in the long run.

So while that might have caused me to postpone my coming out publicly with my HIV status, part of what definitely kept me quiet is that so many people have come out as HIV+. To the point that as I said in my speech at “I Still Remember”, saying you’re HIV+ is for me now just stating a matter of one’s being. Then I realized that while that may be the case, that too few of those faces of healthy HIV+ males in the media are those of Black men. Of course, they exist, but the biggest names in gay media still being the racist behemoths that they are still paint white and light complexioned males as the heroes of our society. Meanwhile, I have either heard tales and/or been eyewitness to some of these white/light faces partaking of the very same unhealthy practices that I speak against. So where are the many healthy Black males to disprove the negative stigma of what HIV looks like? And do so without the hypocrisy that the racism of many gay media outlets allow white/light males?

Too few on both counts.

And I believe that is what incited that conversation with myself to make World AIDS Day 2018 be the day I publicly admitted to being HIV+.

So now that I have put the truth out there, I know I have incited many questions. Many questions about some things I've said in the past about safe sex, barebacking, HIV, and STIs. Well, let me warn you... we are talking about ME here. So while you may think you can surmise an answer, you will likely find you need to talk to me a little more for the correct and honest answer.

For that reason, I am open to emails, interviews, discussions as a moderator, guest speaker, or participant to expand on this. Plus, I am realizing that this revelation is an opportunity to expand on my knowledge I can share as a sex educator.

So let the expansion begin.... 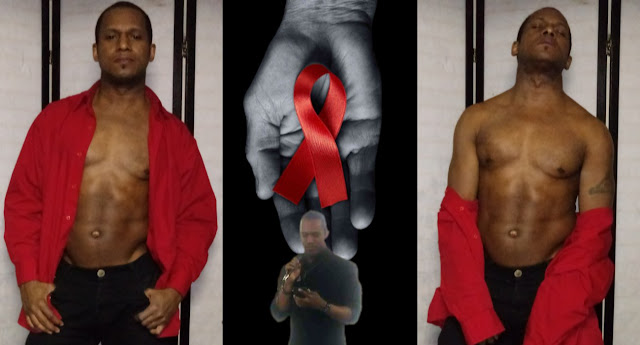