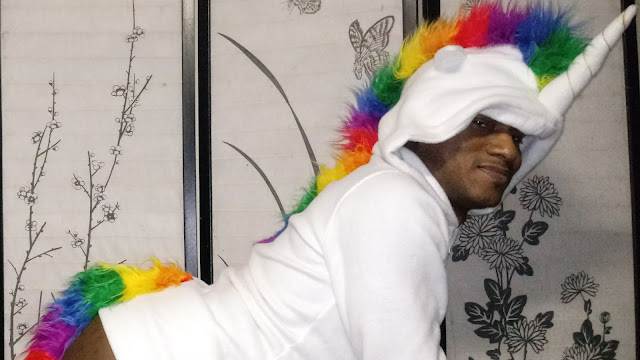 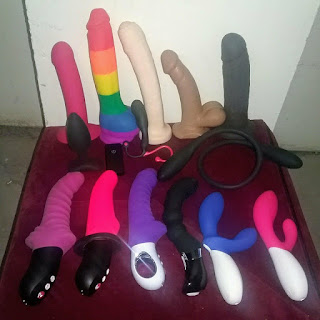 I'm versatile, but it had been awhile since I last bottomed. Long enough of awhile that I had to use one of my sex toys to take the edge off. That says a lot when, truth be told, I rarely use my sex toys. And as you can see, I have a lot of just anal-friendly sex toys alone, and more have been added since the above pic.
One of those nights, I tested my new FemmeFunn Wireless Turbo Baller dildo to twirl around in my ass while I imagined getting pounded by one go-go boy I drool over at The Cock. This was prepping me for Saturday which was a day I was hoping the bottom in me would get resurrected. In fact, it NEEDED to be resurrected.
I go to a private naked party in Jersey just about every month. It was so much fun. Even more so since it is strictly by chance that the 2 hot guys I had sex with....I bottomed for. AND while I'm not a size-queen at all.... those 2 sexy men had the 2 biggest dicks at the party.
But FYI, my bottoming for the night did not stop at that party.
You see, I rode bus to the Port Authority as part of a group of 4. Then I found myself doing something I've never done, and always hated seeing other do. I parted from conversing with the group to focus on my phone. I did so because I got a text, which is highly unlikely for me because of the time (1 AM).

That is unless it a booty call.
As it turned out, it was a member of a couple I've played with before. A couple that put my hole through it months ago by both of them trying to fist me, tag teaming me, having one dick in my mouth and another in my ass, and then double-penetrating me.
I could have ignored the text. However, even though I'm versatile, when I get good dick (like the 2 I had at the Jersey party), I become an insatiable power-bottom. I concede when there are no more givers, but I am always ready if a sexy new arrival comes along. So being hit up by that couple was just the new arrival my hole desired.

As soon as I entered their place, my clothes were off in no time. With tasting both of their cocks in my mouth, and their tongues on my asshole. Wetting it and teasing it of the pleasure soon to come by the head of their amazing cocks passing through. Followed by them putting me in every position. From tag-teaming me doggy-style and missionary while the other watched; to doing doggy style with a dick in my asshole and another in my mouth. Then came what I knew the 2 monster cocks I took at the Jersey party prepared me for ----- being double-penetrated.

Since one of the couple was a tad darker than me while the other was lighter, part of my sexual bliss was born out of being the center of a sexy skin rainbow. A sight not enough in the American gay community look to welcome, especially at parties. It's what can often make more intimate gatherings like this more appealing.

Thanks to the MTA (Metropolitan Transit Authority), with all of its transfers because of weekend track work, my train ride home took an eternity. And after all of that sex, great sex, I was exhausted.

Exhausted, but without one bit of shame. Because of that, I could hear the stanza from my poem "Strut of No Shame" that reads:


And I will have no shame or fears

Because of the time of the night, the trains were not crowded. However, even with a wool trenchcoat on, someone might have caught a whiff of something. And if anyone did, daring to make a face, I would have simply wrote off their being "appalled" as them covering up their envy.