People are the products of their environment. These environments have often programmed their proclaimed standards long before you met them. If those standards contradict your own, those signs of that environment might fade a bit in your presence. Unfortunately, like a computer, they often reboot in that person when they leave your presence.

So since most media, events, and the most-respected people in gay society do not teach inclusiveness, we have moments where some (mainly blacks) get overwhelmed feeling like the outsider. Even if they normally forge head-first into the situation as a means to combat it, like myself. 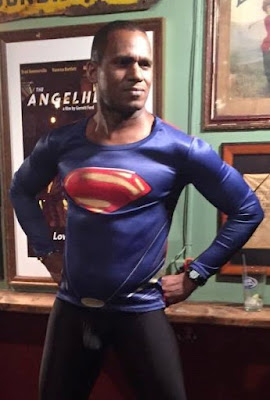 Such a situation has people wearing an armor, even if the event has us totally naked. And with that, there comes a point when that armor must come off. You can and should take the armor off yourself. Otherwise, it will fall off unexpectedly. Resulting in awkward, and sometimes dangerous situations.

I usually take the armor off myself. By either the event ending in time, or me removing myself from the situation. Recently at a party however, I didn't do the latter, and the armor fell off. Thereby creating, not a dangerous situation, but definitely an awkward one.

The host had no idea as to what caused my usually cool, calm, and collected self to suddenly bolt out the door. I later explained giving a much more condensed version of what I'm saying here now.

Many black males experience this, but will seldom (if ever) reveal it out loud. Meanwhile, those whites and light people of color whose selfishness refuse to discuss racism since they so massively benefit from it need to learn empathy and compassion.

At the aforementioned party, I was fine a t first. However, the smaller the crowd got the more I felt the energy making me "the black man in the room". Many black male party-goers feel this. Either drinking themselves into stoopers, or making themselves the main drug connection for whites, and getting high with those whites to avoid feeling the reality of being "the black man in the room". That's why I'm more prone to address it. I'm always sober enough to see it, feel it, therefore remember every detail to acknowledge our community's moments of progress, but too often lack thereof.

Like I said, this is something I, and every other black male feels at just about any gay event in this country. And the only way to avoid it is to exile ourselves further by attending all-black parties like the one I mentioned in a Facebook post I wrote about a Latino I played with at a CumUnion party. And as a born and raised New Yorker, therefore a born and raised American, I should not have to exile myself like I'm in Pre-Civil Rights Movement America when the year is 2017. Especially when the heads of gay media, party promoters, and porn producers further inciting this racism are transplants to this multi-colored and multi-ethnic mecca that is my home.

Any black male you meet telling you they know not of what I speak is in denial. Either that, or they're telling you a bold-face lie to cover the guilt racially insensitive whites and bougie people of color try laying on us. Calling us blacks who speak honestly on this matter, "angry black men" if we dare to bring this matter up.

The question created by these situations are:
Why are blacks and other darker people of color still being made to feel inferior, when they are not by any means?

This insecurity is born out of how it is very likely encoded in our DNA that when we are put on any kind of pedestal, we fear the day (and way) we fall off of it. And it is inevitable that we will fall off of it. For every thing man produces has mortality.

So a white male's time on a pedestal appearing as the epitome of sex, beauty, and intellect; light-complexioned people of various ethnicities given those same props because the whites running media consider them as "passing"; all of the aforementioned seeing a person of a darker color or certain ethnicity, and initially liking what they see, but turn their eyes away just as quickly because the programming kicks in to think of those people as "ugly"; and for all of them, youth being their ticket to climbing that segregated ladder...

ALL OF IT WILL DIE AT SOME POINT. Ageism dismissing older gays will start it on its way. As for its final resting place, maybe not in my lifetime, or yours, but these ways of life will die. And no matter how much of a bravado is put on by those benefiting from that racism, every one of those people are dreading the day their time of being seen as a stud, a muse, or a genius dies.

Worst part of it is that for generations, these gay males still have never realized, therefore ignored teaching the next generation that the more they play into that racism, the more they act entitled to its perceived benefits, the more it's going to hurt when it's time to come down. It's probably because each generation had and has an arrogance saying things like, "I like what I like just because" or worst, "It will never happen to me."

Well, don't we already see the signs that beg to differ? For you can't miss seeing in the bars and clubs, the lonely old white and light-complexioned males buying lapdances and "alone time" with go-go boys. And long before that and very much on-going, how older guys are the main clients for escorts/prostitutes. So basically, those younger gays doing these gigs, are doing so for their lonely future selves.

How much worst does it have to get for us to realize that this RACISM (sexual and otherwise) NEEDS TO STOP???!!! All of this makes it clear how actions like this racism in the gay community creates a chain of livelihoods that shouldn't even be called "livelihoods". For they are making our community put on a happy face when in all actuality, we are imploding.

Therefore, all of the aforementioned acts create a path that benefits no one. 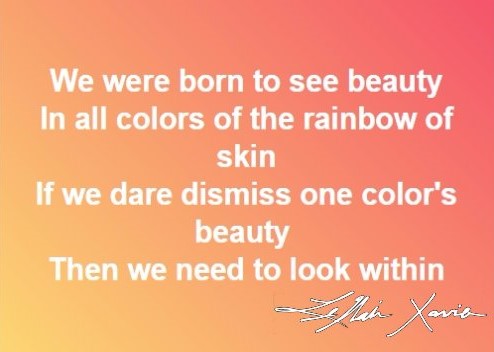 Posted by LeNair Xavier at 9:06 PM