Enjoy Blacks Bottoming, Or Be Denied This Black Topping

Recently, after a long while, I attended the Monday night Milk Chocolate NYC party at Rainbow Playground in Queens. There weren't a lot of guys there at the moment, and most were not cute.

However, there was one guy sitting in a chair that I noticed as I traipsed through the video lounge, but I didn't set my full eyes on him. While I could feel his eyes on me, I never returned the look. Because from what my peripheral vision caught, he had a nice body, but I thought the hair on his body was a bit erratically patterned for my taste. As if he shaved it weird.

A little while later, while wandering around, I came to the open dark play area. I could see from the silhouette that that guy I noticed before was there. Getting suck off by someone. None of the other guys there caught my interest, so I spent most of my time dodging their reach for me. Then he reached for me. I wanted to let him touch me, as my eyes focused and my ability to see in the dark made his silhouette become a man with a face in that dim light. Leading me to discover that what my peripheral vision thought was hair on his body earlier was not hair at all. They were tattoos.

I still didn't let him touch me at that moment however. Simply because I didn't want to include the guy sucking him off, or any of the other guys trying to touch him, or me. So yes, I denied myself this hot tattooed guy because I didn't want to be rude to anyone else. Because while it is highly accepted in sex party/backroom behavior, it's actually quite rude to feel so entitled to knowingly take a guy away from someone(s), and allow the perceived beauty bestowed on you by your color, ethnicity, body type, etc. to give you the fuck-faced audacity to do so.

Well, Karma must have smiled on me for taking that stand. Because I did get him later. When I moved away, he shortly after stopped the guys touching him, then came to me. We then started making out. The guys who wouldn't take "no" for an answer stuck around. Putting their hands in the way to feel his cock while I was soon going down on him. When my cocksucking got too good for him, he pulled me up, and kissed me some more. Feeling my ass making it very clear that he wanted to get inside me. I walked backwards leading him to the large sofa in that area. I reached in my thigh pack for my supplies. Lubed up my ass, and let him in.

Once those around us saw that his raw Italian cock was going to go inside me, and not the other way around, the crowd thinned out. At the most, I would see one person playing voyeur. And it was always changing as to who it was. They seemed to get tired of watching a white guy top a black guy, see it wouldn't change any time soon, so they would move on. Then another would take their place and do the same. Which was fine by me. Because even in that wide open space where anybody could come by and try to participate, our hot sex was so unseemly to them that it left us to fuck like we were alone in a large hotel room. Able to change positions, and moan and groan without disturbing a soul. Sad to say at a sex party, but it's me looking how every dark cloud has a silver lining. And our being able to be so intimate with this primal fuck was that silver lining. Especially this one move he did with me on my stomach.

He would pulled up with just the tip of his cock inside me. He would then hold that pose for a few seconds. Leaving me to wonder if and when he was coming down. Then BANG! He plows down hard into my ass! I felt the jiggle of my ass cheeks each time he did that.

We later ran into each other again in the video lounge. He invited me to sit next to him, and we started making out immediately.  During our making out, one thing that became evident about his body that he wanted to show me was how he pre-came a lot. Letting his dick lean on my thigh, so he could pick up his dick, and let me see a string of pre-cum connecting us. So this explains how when our making out soon led to me getting on my knees and leaning on the back of the sofa to bottom for him again, without much lube, my hole let him in. His lube was spit and pre-cum, and my hole was more so relaxed because it was him. 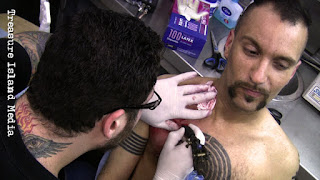 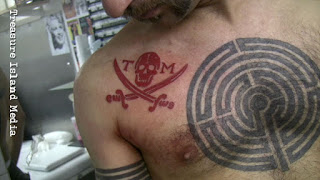 Way before this however, back when we were making out, I was considering topping him. So after making out for a bit in the afterglow of this fuck, I eventually asked him if I could top him. He was quick to state him being ok with it. He then asked me if I wanted to do it there in the video lounge on that sofa, or go into a booth. I chose to take him to a booth.

So my way to undo what we've been taught was by leaving them with the memory of us sucking each other, and fucking ....with him as a top going at me hard and deep. Even if they didn't stick around long to watch like I mentioned before, the mere sight of it for just a few seconds plants the seed in the mind of how a black guy as a bottom to a white man is possible, and can be just as beautiful as interracial sex with a black guy as a top, if not more so. So I took away the beauty of what we were going to do, as a means to more so undo what porn had trained them to accept.

He loved my cock just as much as I loved his. I won't go into details about my topping him, but anyone outside the door of that booth got quite an auditory show. It was enough that when we stopped, someone tried to come in, but undoing the hook-lock. They never entered enough for us to see them. So I leaned a little forward to kick it shut, then got up to put the lock back on.

We again laid there basking in the after-glow of sex with a formula that was quickly becoming our thing: Fuck a bit, savor it, fondle each other, then fuck again. And the last component of that is exactly what happened.

Once I felt the urge in him I laid on my back and raised my legs. I dabbed my hole with lube because I wanted his pre-cum to play a strong component to being my lube. So he aimed his wet, raw cock at my hole, and went in. And once he felt the resurrected tightness of my hole around his dick again, he pounded me mercilessly. I think what make sex with us catch guys' attention was how regardless of who was topping, neither one of us was silent. Our fucking was a constant overlapping of moans saying "God, I love your ass!" with "God, I love your cock!", or "Gimme that dick!" with "Oh, fuck yessss!"

Soon after, I called it a night. Basking in not only the sex, but the stand I took against being considered worth watching only if I'm a top by denying sex party patrons the sight of it when I did top. And until I see our community change their view on a black guy being a bottom, if I can, I think I will continue to make that my m.o. The same way I'm still going commando after advising all black men to do in "Black Guys Wear Underwear, Too". Proof that I do practice what I preach.

It's easy for me to take that stand because my being watched while fucking at a sex party/backroom is not a necessity. Nor is it a desire. It is just simply a part of the sex party/backroom scene that I accept, but I am more than willing to avoid it if the opportunity presents itself. Especially when it's to fight stifling imagery drilled into our heads.

A black man ready, willing, able, and hungry to ride the entire skin  rainbow of ass and cock.
Posted by LeNair Xavier at 4:04 PM