What does these 3 celebrities have in common?

They all look like someone I've had some kind of sex with. Not total doppelgangers, but enough of a resemblance that when I saw them I said to myself, "He looks like someone famous".

So after getting bored of witnessing this (again), I started towards the door. Then in walks a guy over 6 feet tall. So tall that he instantly became the tallest guy in the bathroom. The sight of him made everyone stop and take note. Even I took note, which is why I stepped right back to where I was. For I needed to think as to whether or not I was going to try to make a play for him, or was I going to proceed with my exiting the bathroom. And what made me hesitant as to whether or not to proceed with my exit was something the guys closest to him ignored while they attacked him like vultures on a dead carcass...

He was drunk off his ass.

He didn't stumble in. His drunkenness was simply imprinted into his energy, So much so that only one's desperation would block them from taking note of its existence. 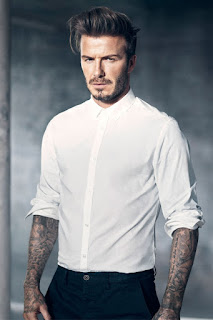 I then realized he looked like some one. A celebrity. And that celebrity was David Beckham. This guy wasn't a doppelganger. He just looked enough like David Beckham in his teasing opened button-down dress shirt and well-coiffed hair to make an image of dressed-up David Beckham pop in my head.

So I decided to head towards the door. Stopping only if the David Beckham look-alike made eyes at me. Because of his being drunk, I normally don't care. Normally, I give a look at such a guy, and let my eyes say, "Ewww! You're drunk! Please, don't bother trying! You're not getting lucky with the beauty of sobriety that is me."

I tried taking that same stance with this guy, too. Then as I was heading towards the door, he gave me a look of interest. That was when I said to myself, "Yeah, he's drunk as a skunk. But he looks like David Beckham."

So I reached for his chest, and he grabbed my ass. I ran my hand down his chest, over his belt, then onto his crotch. At that point, he undid his pants, and pulled out his dick for me to play with. I played with it for a few seconds, then the craving to have it in my mouth got to be too much. So I went down on him.

This Latino was a hater because he either wanted to suck the guy's dick himself, but I didn't need liquid courage like he did (for he had a drink in his hand the entire time), or because he hated my exhibitionism overall, Whatever the case, he still needed to stop telling on himself by shutting the fuck up.

As for following the Latino's critiques, most important point of all, it's not that Latino's dick I was sucking on. So he really needed to shut the fuck up. Especially when my playmate's pleasure outbursts prove I should keep up whatever pace I choose. And in regards to those pleasure outbursts, knowing they might be more out of drunkenness did make me a bit apprehensive about continuing, but then that lusting fan voice whispered again, "But he looks like David Beckham."

Sometime after we all left the bathroom, he was in my path as I was walking through the crowd. I tapped him, and said "Excuse me" as I walked pass. When he looked back and saw it was me who tapped him, he put his arms around me and gave me a big hug while screaming, "Oh my god! You're are sooo good!"

I replied by simply smiling and saying, "Thank you."

He then said, "Where do you want to go?"

I wanted to tell him to take me to his place. I want him his over 6 foot tall frame to tower over my 5'6" self, and rain all over me with sweat from fucking my ass like a savage. I wanted to go back to his place to ride his cock, and make him moan again from my mouth on his cock some more. And moan even louder when I make it my asshole wrapped around his dick.

However, I've dealt with enough too-late-discovered substance abusers and drunk bar patrons in the past to know that be he normally a top or bottom, going with him anywhere would have been a lost cause. For if he was a top, my sucking his dick earlier showed that he definitely had a case of whiskey dick. And if he was a bottom, he was so drunk that he would probably not remember why I was in the bed when the sun came up. So why put myself through that when I already know he's drunk?! I should refuse.

So I did. I turned him down. Allowing that to be the point at which I finally quieted my lusting fan voice saying, "But he looks like David Beckham!"

Now, every now and again I wonder, if we cross paths again, I'm sure he'll be attracted to me... But will he remember we've played before?
Posted by LeNair Xavier at 1:43 PM