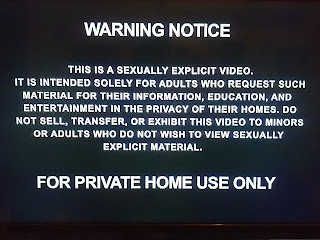 Why do we need this discussion? For as great a country as it is, we live in America, which has a great flaw like most countries of being sexually oppressive, repressed, and misogynistic. Such a prime mainstream example of this sexual oppression, repression and misogyny is how 11 years ago, Janet Jackson's exposed boob from a wardrobe malfunction during the Super Bowl Halftime Show made phone lines blow up, and her banned to attend the Grammys, when all she did was own the titty. Meanwhile, her male performance partner, Justin Timberlake, the one who removed the part of the costume that exposed the titty, was still allowed to attend The Grammys.

With so many examples such as this still happening 11 years later, it's proven that we Americans are not having the discussions about sex, nudity, our bodies, and respect of the opposite sex's bodies like we should. So where are we going to get those lessons from? The one thing that appears to be the most open about sex ---pornography. And which gender is the main connoisseur of porn? Males. And what are females and gay male bottoms taught to do during sex? Let the penis-inserting male take the lead, and no matter how poorly skilled he may be, just grin and bear it.

This brings us to the point of this post.

For I love feeling the flesh of where my penis will soon lay. Whether it's with the barrier of a condom is a personal choice that I will address later. Anyway, for people who share my sentiment, arousal starts even before entering our sex partner's body. It actually starts the moment the person inserting the object reach for the lube, with the person being inserted into also aroused by the anticipation. With that being the case, I don't understand why porn dismisses the application of lube be it to a finger, penis, or a toy like it is irrelevant, and won't light a spark in the viewer when it obviously does.

CONDOM USE
I have long been a supporter of condom use being that of personal choice. I have also never been a fan of the magically appearing condom. Especially in movies that tease viewers that a penis is going into a vagina or anus without a condom. I've even hated it in some of the movies I've done.

Therefore, until porn directors gets those couch trips, we need to stop taking porn's lessons for the sexually selfish, overcompensating male to heart. Instead, we need to listen to our bodies, as well as listen to your sex partner's words and body. And if you hear your partner's words and body telling conflicting messages, it's likely because they're following some culture's rule that makes them refrain from being honest. Since that happens too often, we need to break the chain by giving them the chance to be honest. So since communication is the foundation for any healthy relationship,...simply ask your lover.
Posted by LeNair Xavier at 12:34 PM