Back in mid-June, those of you who are friends with me on Facebook might recall this update: 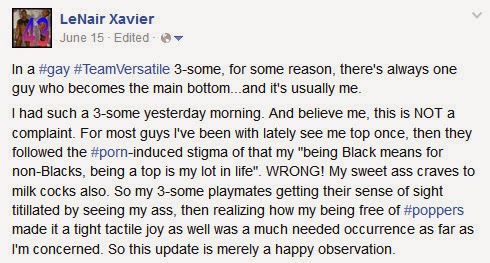 It's because the tweet is about one of the guys from the threesome,...who I came to regret inviting over to my place later that night.

I started regretting giving this invitation early on. As you will see later, my regret started before his arrival to my apartment.

When you first walk into my apartment, to your left is the stove and the sink. There is a light hanging over that area. A light that you won't see once you walk to your right, because their is a little wall coming down from the ceiling blocking that light. My bed is more than 6 feet away from that area. So any heat from that light is not going to affect the temperature of my room if we're on my bed. Now, the same can't be said for the light fixture that is over my bed. But I was smart enough to turn that light out. So what does this guy says?

"You should turn out that kitchen light. Makes less heat."

For while I maintained my calm during both instances, my first thought was to say something along the lines of what I thought that other host should have said, which was, "Look here, you Poindexter mutha fucka! Don't you dare come into my home trying to give me a science lesson, telling me what lights to turn out in my house! If your ass got here on time, instead of your missing brain cells from sniffing those mutha fuckin' poppers letting you go 11 stops pass your stop before realizing you're going the wrong way, this apartment wouldn't have gotten this hot! Furthermore, you're not a friend, you're just a trick. So mi casa ain't su casa, bitch! Don't get it twisted!!!"

And yes, that was the part where my regret before he actually arrived began. For while I was waiting for him, I initially had my fan on to cool the room. However, the wait got so long that I fell asleep. And what woke me up was him texting me about being 11 stops pass the stop he assumed he was supposed to get off of. But with that, the cool night air that the fan was blowing had made me cold. So I cut the fan off. Hence why by the time he got there, my apartment was hot again.

I was so angry by his telling me what to do with my lights that I did something I never do with sex. I used sex for revenge. We flip-fucked with the sole purpose of me giving him good ass and good dick that he would want again, but would be denied. And as the "sex" went on he solidified me sticking to that plan.

For he sniffed so much poppers that he made me get a headache in my own apartment. Much to my chagrin, I've had guys do poppers in my apartment before. In fact, it might surprise you, but the guy from my video "Why It's 'WE Fucked'" used poppers. But he or no other guy was such a popper-addict like this jerk that in order to survive them being in my home that I would have to hold my breath each time they took a huff. And since this is my home, why should I have to hold my breath? This is my place to be free.

So he decided that he was going to top me. He was good for a bit, then like a common popper-head, the poppers made his dick go limp. So he had me in missionary position, boring to death trying to make out with me. Because by this point, the muscle-relaxing effect that makes poppers moronic to take had taken effect on his dick. So he wasn't doing a bit of thrusting because his dick was getting more and more limp. Therefore, slowly slipping out of my tight hole.

After I got tired of his popper-addicted presence giving me a headache in my own home, I decided it was time for this pathetic charade to end. So it might have seemed like a tired line, but it was all too true. I told him that I had a headache, and that I had no Advil or anything in the apartment to take for it. Therefore, I had to go to the store. Do you know what this ill-mannered, socially inept fucktard said next?

"Can I stay here and wait for you?"

Was this mutha fucka for real?! Now, either he: a) sniffed so much poppers that his brain cells were truly gone, b) was that ill-mannered and socially inept, that he had no idea as to when the fuckin' party was over, or c) a combination of a & b! First of all, considering the direction from which I later discovered that he came to my place from, there is no open mini-marts except right outside the train station, which is about a 10 - 15 minute walk away. So did he really think that I was going to leave him - an uncommon trick, a stranger - alone in my apartment for 20 - 30 minutes???!!!

So I replied, "No, you've gotta go." So we got dressed and I walked him to the train station. However, I felt so accomplished in getting him out of my apartment, my headache lightened up enough that I almost forgot to buy my Advil.

If you recall, I did punch a fucker across the room for invading my personal space that is my body. And I treat my home with the same amount of protection. So this guy, after all of what he did, he's lucky that he walked out of my place in one piece...

Well, his outer body might have been in one piece. But his brain and common sense is obviously fuckin' falling apart at the seams. And due to no one else's fault but his ignorant ass own!
Posted by LeNair Xavier at 8:23 AM