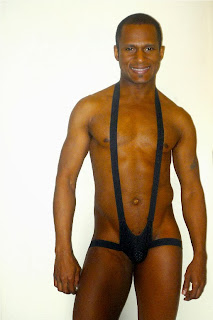 This outfit seems to have been doing something to people. For this is what I was wearing when the guy from "Potential Rapist(?) At The Cock" tried to close me up in the bathroom. Now, while that tale showed a guy's mental illness via lack of self-control, there are most positive stories to tell.

One recent Friday, I went into The Cock. I know the bartender, and he asked me if I wanted to go-go dance. I said, "Sure". While thinking I would just wear the little underwear I had on, I then remember that I had the Suspender Slingshot from Undergear still in my coat pocket from when I wore it at the $2 Tuesdays at The Cock that week. So I decided to wear that instead. The result was totally unexpected. I wound up making more money in tips than I've ever made go-go dancing at The Cock (and possibly any place else). And at no point during the entire night, did someone try to pull my dick out to suck it like the White and Latino go-go boys have become prepared for. I have done so in the past, it seems they were so mesmerized by that outfit, that it slipped their mind that night.

The following Monday, I went to The Cock for Playpen Mondays where you get a free shot if you strip down to your underwear. Well, being the exhibitionist that I am, I don't really need a free shot as reason to drop trou. However, when I did drop trou, what was under my clothes?...After a good wash, 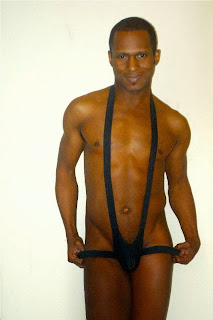 After awhile I did my usual venture to the backroom to study guys' behavior, and if I wound up in some action, not go looking for it. I was concerned that what I was wearing was going to get unwanted attention, which it did. With guys putting their hands on me when there's more than enough room to motivate themselves without touching anything or anybody. Anyway, after getting over that hurdle, I found myself standing next to a short gorgeous, well-built Latino. We looked at each other for a moment, then I felt his eyes still on me. I looked back again, and this time, gave a smile.

We slowly started easing towards each other, and the next thing I knew was we were making out. Once his hands went to my ass, he would not stop grabbing it. We were rubbing crotches and let me tell you that outfit is not made for hard-ons. So I was without a doubt popping out of it. He then started to undo his pants, and once his cock was out, I went down to suck it. After working it a good bit, I stood back up with him reaching in his pocket. He then said, "I want to fuck you." So his hand reemerges from his pocket with a condom in it. I let my action speak louder than words to say, "Go for it" by taking the condom, and  putting it on him. Good thing since this is The Cock, that I not only also carry condoms (in my sock), but I also carry lube. I had a variety of lube packets in my sock. And on this night, the lucky winner to be used wound up being Spunk Lube.

I got on my knees on the sofa back there, and let him pound me. And never the lazy bottom, I made sure to give him a break, and grinded his cock. As much as he was loving it, this did as it usually does, and made him pound me harder when I finally decided to give control of the thrusting back over to him. He came, and afterwards told me that I had an amazing ass. And I replied that he had an amazing dick, when truth be told, his whole body was amazing.

Later on in the night, I saw this White guy. He was also short with an amazing body. I never follow guys into the backroom, but this time I did. Well, it seemed that I was too late. He had made eye contact with a White guy in his underwear, and started making out with him. Normally, I would have just bowed out, and move on. But even though they seemed quite into each other, something seemed off, and made me stick around. Maybe it was the fact that while they were fooling around, the White guy I followed back there saw me for the first time, and froze for a bit. Well, for whatever reason, they soon went their separate ways, and while the guy I followed back there was leaving, he stroked my arm. Now, me and him started making out. And like the Latino before him, once he felt my ass, there was not much letting go.

He then asked for me to go to the bathroom with him. I went over to the door, and while we waited, he spoke to me for the first time, and with a European accent asked if I had a condom. I told him I did. Then the door finally opened. But there was more than one guy in there. One of the guys was someone I knew, so he let us in. I'm not much into public bathroom sex, but I made a concession for this guy. It turned out that there were 4 other guys already in there. One of the 4 was bouncing between the other 3 and me with my new playmate. My new playmate was trying to include him, but I had no interest in him. I put the condom on my playmate's dick, and he leaned his back against the wall while I rode him. The guy bouncing between the 2 groups kept trying to make me kiss him, which I fuckin' hate. I mean, if I moved my head not once, but twice before, take the damn hint! So I continued with my new playmate. Then at one point when he slipped out, I went on to suck his dick. He said he wanted to cum. So he came in my mouth. And being the cum pig that I am, I loved it.

After a good rinse, and a drink of soda, I kept to myself the rest of the night. Well, I think that after taking 2 passionate cocks up my ass, I earned a rest to stay to myself, and do my Kegels to maintain my ass tunnel's tightness. During that time, I reflected on that European's accent, and how he wasn't a face I had seen there before. Which led me to realize that with the exception of a select few, the usual White American regulars on any given night are racist as hell.

I also reflected how both of my playmates were shorter than me, and both topped me. Which I liked a lot. For it went against the porn-induced expectation that my taller Black self was going to top them.

Once the lights came on for the bar to close at 4 A.M., this tall Black guy was talking to a guy next to him, and looking at me. He then started talking to me complimenting me. None of the stereotypical bravado, aggression, or invasiveness that made me write "Black Guys, I Don't Owe You A Feel, OR A Fuck!", or its follow-up post. He presented himself as a kind and civilized gentleman. He invited me back to his place. But he was enough of a gentleman, that when I told him that I had to be at work at 10 in the morning (which I did), in his promise to have fun with me for only 30 minutes, he never said his true intentions that I could feel in his energy to fuck me senseless. My concern with that idea of 30 minutes was that it might not be enough time for one or both of us to be satisfied. Since I for one know that as I've said before that when I bottom, I'm a power bottom. And when a cock is good, I'm an insatiable power bottom. So after the goodness of both the Latino and the European, I very much wanted, and could have easily taken more dick. But I had to be responsible and get home so I could get to work in less than 5 hours. We did exchange numbers, plus he lives very close to the bar, so it's not impossible for us to actually make this happen someday soon. 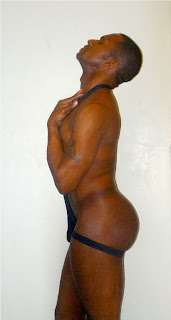 So that makes my night having a Latino, then a White guy, then a Black guy propositioning me. All I would have needed was maybe a Middle Easterner and an Asian, and I would have definitely had the United Nations if not topping me, at least courting me.

Email ThisBlogThis!Share to TwitterShare to FacebookShare to Pinterest
Labels: racism, The Cock