Grindr & Listeners - A Tale of 2 Rarities

As I conveyed in my poem "Bare & Read Our Bodies", social media, dating/hook-up websites and apps contribute to the human race's increasing social ineptitude. That's why most of my hook-ups and dates (written about on this blog and not) originated from an outing in the real world. Not sitting on my ass, or being a wallflower wandering through cyberspace on a phone, tablet, or computer. 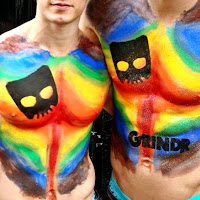 Recently, I had a hook-up through one of those apps. Grindr, to be more exact. A hook-up app whose:
1)senseless censoring of some of my pics have made me feel harassed, to the point that I once took the app off my mobile device, and;
2)contribution to the aforementioned social ineptitude of our community led to a line in the poem "Bare & Read Our Bodies".

So the 1st rarity for me was actually getting a hook-up out of Grindr, period. The 2nd rarity was something good coming from that hook-up.

When we decided to meet up, we started exchanging pics. From all he said I knew whether he was a top or bottom, he liked my ass and was going to eat me out. So I asked if  he was a top or versatile. He said he was versatile. So although he was ready to prepare himself to bottom, I told him he didn't have to because I was getting in a bottoming mood for him.

He came to my place. I greeted him wearing only sweatpants and sandals on my feet. He started to strip right away. I gave him my ass to eat out as promised. His tongue went against my tight hole to open it up. Once he got a little bit in, he licked what he could like the walls of my ass tunnel were made of gold. I then sucked his cock. Put a condom on him. I pleasantly surprised myself when I sucked it to keep him hard, and discovered the condom was flavored - vanilla. I lubed up my ass, then his cock. We then started fucking with me riding him cowboy-style. Then we evolved into missionary. At one point he stopped. I thought it was him wanting to change positions. Hence our conversation as follows:

Me: You want to change positions?

Me: Well, since you talked so much about my ass, do me doggy so you can enjoy the view you came here for.

At this point, I got on all fours, and my top pounded my ass from behind.

My original plans for this hook-up was for it to be a quickie. I was to fuck, shower, then head out soon after, which he was aware of. Hence part of the reason for his quick strip after walking into my apartment. The other part was that I told him beforehand that I was now anxious to see him naked. But that conversation during the sex made it so phenomenal, that I said to myself, "To hell with going out! Keep on fuckin'!"

That same kind of exchange happened later on as well. And I again welcomed it. For it meant BOTH of us were communicating a desire to please the other, and compromise whatever we may have really wanted at the moment in order to make our sex partner happy. Now, this was just a one-night stand. But we did more communication in that one night than many couples do after years together. Probably since their 1st night in bed together.

What makes my playmate even more deserving of a pat on the back is the fact that he was only 23. I've seen a lot less communication and desire to please their partner from guys not just older than his 23 year-old self, but even worst...from guys older than my 42 year-old self.

Well, if some of you guys ever wonder why you're single, I think this tale of one of my sexcapades just showed you a BIG reason why.

It's because of SEXUAL SELFISHNESS. Everything you do when you fuck is all about pleasing you, and not at all your partner. You are a human being, and whether he/she is a one-night stand or the love of your life, so is your sex partner. Now, there are enough things in this world to dissolve a relationship. Do you really want your selfishness, or lowering your own worth by tolerating someone else's to be what dissolves yours?

And I'm passing this knowledge along after observing the courtesy of a 23 year-old one-night stand. If you are any number of years older than that, and are not that courteous to your sex partner, don't you think it's time to stop your selfishness, and bring some good Karma you way.

After all, none of us are getting any younger.
Posted by LeNair Xavier at 11:04 AM

Email ThisBlogThis!Share to TwitterShare to FacebookShare to Pinterest
Labels: Why You're Single, Word Of Advice