HIV, STDs & The Power of CHOICE 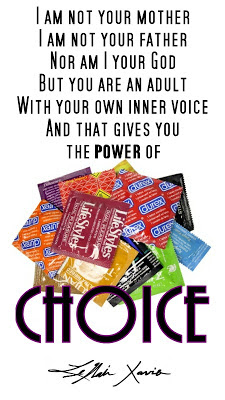 Earlier this month, I made up this collage and posted it on this blog and on Facebook. I knew being as brief as it was that it might require some explanation. Because truth be told, as much as many of us try to put forth the facade that we don't need things explained to us, reactions prove otherwise.

Such as the exchange between me and a Facebook friend via the comments when I posted the photo there. While I understand where he is coming from with a great deal of what he said. As I said in my reply, my offense to his reaction was that he harped on my using the word "CHOICE". I highlighted the word "CHOICE" out of respect for us all being adults in this situation. So I felt acting like I was wrong for saying "CHOICE" was him greenlighting more of the patronizing safe-sex messages that have been drilled into our heads thus far.

Let me start explaining why I made this collage by saying that I am not pro-barebacking. Nor am I trying to be the condom police intruding upon your bedroom. One reason I made this collage was because I am pro-choice on condom use, and I feel encouraging both of those other extremes is quite dangerous, and I for one am so sick and tired of seeing us adults treated like children over this matter. And the reason adults are treated like children is mainly because of America's attitude towards 1)addressing sexuality with their children, and 2) respecting as adults we have the power of choice. So this leaves the media to try doing the job parents should have started since the children were late pre-teens and continued from there.

I want the media to respect us, the target audience. But in order to show that respect, whether parents did their part of not, certain aspects of sex must be taken into account by the media if these messages to combat contracting HIV and other STDs are to have the desired effect of decreased transmissions.
TAKE NOTE of how the nature of sex is to be in the heat of the moment.
TAKE NOTE how as adults we have inner voices that gives us the power of choice.
TAKE NOTE that  the nature of sex is that there should not be a barrier between you and your partner. Therefore, sex with a condom is unnatural. However, because of the times we live in with various STDs that we may need to go against nature. Therefore,...
TAKE NOTE that which based on the aforementioned nature of sex (being in the heat of the moment) going against nature is not always so easy to do. And also
TAKE NOTE that we live in a time where more and more people (young and old) are using sex to fill emotional voids made by physically and emotionally unavailable parents and significant others, mainly due to putting career before family.

If all these things are taken into account, we can try to come forth with a more effective, and less condescending message. I say "try" because the sexual repression of our society has done its damage to both, our youth and our adults. On a subject like sex, no matter how well-intended these safe-sex messages are, you can't treat an adult like a child and expect him/her to respond without rebellion. Instead, they are going to listen to nature, which is sex void of that barrier called a "condom", even though they're aware of the fact that it includes risks. So all you can appeal to now is their adult power of choice.

Hence why in that Facebook commentary, when the matter was brought up about when making a choice that you are also choosing the consequences, part of my response was to ask him as I now ask you, ...Do you REALLY think we don't know about the consequences of our actions? This is what I mean in us adults being treated like children in regards to the matter of condom use and STD transmissions. We are well aware of the consequences, but we are talking about SEX - an act that has a nature of being done in the heat of the moment. This is why if someone falters in their condom use, you have little to no right to play judge, jury, and executioner. Doing so tells me that you pointing and shaking that "Shame on you" finger at someone is your way of making yourself seem sexually superior (which you're not), since you're trying to distract others from seeing how many times you've made that same mistake, or different ones in judgement.


And though I don't owe you this, I'm only confessing this to further prove that I practice what I preach, and have been doing so for quite some time now.
In early 2003, within my first year after coming out, I contracted a STD. I sat in Chelsea clinic unlike I am now, uneducated about HIV and other STDs, but fearing HIV mainly, even though I used a condom with the person I got that STD from. But while waiting for the diagnosis and possible treatment, I told myself, "Whatever happens LeNair, you made a CHOICE to suck that guy's dick. You made a CHOICE to let him suck on yours. And since it takes 2 to tango, he made a CHOICE to let you suck his dick. And he made a CHOICE to put his mouth on yours." So on that day, I taught myself to own the consequences of my actions, and how the foundation of much of what happens to us is CHOICE.
And FYI - the STD turned out being syphilis.

Like I said before, it's all about us being adults, and treated as such. Acknowledge that, then maybe we can create a message to slow transmissions down.
Posted by LeNair Xavier at 7:00 AM