Silicone Ain't Got SHIT On Me!

This past week, on my Tumblr blog, I posted some pics of some new underwear I had bought from UnderGear. They arrived just in time for me to show them off this past Sunday when I went to Treasure Island Media and Hard Drive's Sea Tea. It was pretty much an underwear party, so of course you know that I was ready and willing to take full advantage of the clothes check they made available.

So when I saw Hot Rod this past Sunday, imagine my shock when a friend standing near me look at Hot Rod's ass and said,... "Is that real?"

Since like I said, I told no one about that posting, that was the point when I began to think there was actually some truth to that posting. With that in mind, I told my friend that I have a picture of Hot Rod from last year's Folsom Street East, and that I was going to make a comparison between that pic and what I see before me on that boat. I found the picture, and I immediately saw a difference. But to be sure it wasn't some underlying cruelty at play, I googled "Hot Rod's butt implants". And that's when I saw the below image that I included in the comparison between last year and this year. 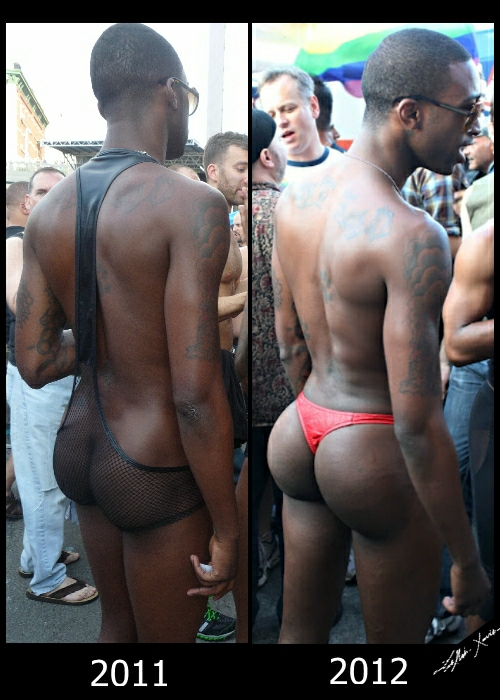 On this cruise, it turns out that me and Hot Rod had on the same brand of jockstrap, Good Devil. Even with the same colors, but in different places. While mine is the black and red that you see, his was black with a red waistband and black letters. Being the 2 porn-bodied Black guys on this cruise with the same brand of underwear made me also the target of people seeing me walk pass and saying "Is that real?" 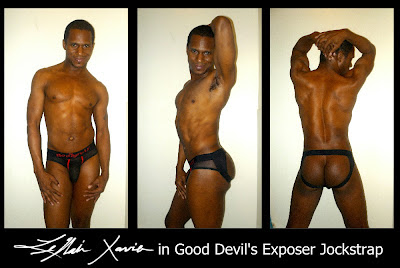 I took it as a bittersweet compliment, because there was uncertainty in accepting it. For I was wondering was this really a compliment to me, while it was taking a shot at Hot Rod. For if Hot Rod really did have work done, then I was getting a compliment at the expense of his insecurity. OR had whatever Hot Rod might have done to himself put every porn-bodied Black guy (few as there were on this cruise) with a nice ass under suspicion, when butt implants and injections are thought to be more of a "White person thing" to do. And like I said, even more so for me, because we both had on the same brand of jockstrap.

Another thing some guys said to me when they saw Hot Rod's ass was "It seems you've got some competition."

Let me be the 1st to say that as far as I'm concerned, if the rumors are true, there is NO COMPETITION. Because for one, I'm not competing. Yes, I have competed in ass contests in bars. But as far as I knew, all of the contestants brought to the contest the butt that nature gave them. NOT the silicone ass they chose to BUY. And whether the method was implants or injections, along with that purchase comes the FEAR of the embedding into your body a MAN-MADE creation made to profit from vanity and insecurity.

What's so saddening about this is the fact that if I'm not mistaken Hot Rod is in his mid-20s. Yet here I am, not sorry to toot my own horn in this case, because at age 41, I can pat myself on the back for having a better ass because I don't have to worry if it's going to spring a leak. My concern for my ass is a natural one...How long before nature instructs Gravity, "Bring that bitch down!", and I will have no choice but to accept it. OR if I choose not to accept it, I could look like Hot Rod and Rafael Alencar whose obvious fake asses are void of the slope that natural asses have.

And after that last sentence, it is quite obvious that I am done with trying the diplomatic approach on this, and alleging that Hot Rod had work done. Look at those 2 pics! There's no "allegedly" about it! Hot Rod took a trip somewhere, and had his ass cheeks stuffed with something.

Please take note, that my addressing this is by no means out of me trying to throw shade. It actually is me shining the light on truth on the desperate measures people in the sex industry go to please whoever. So I actually feel sorry for Hot Rod feeling the need to do this, just as I feel sorry for the females who get breast implants who also can't compete with nature. Hence why those fake breasts look like flesh-colored cereal bowls with knobs on the ends attached to their chests.

And I never tried putting it into words then my advice for those wanting to alter their bodies, but in light of this situation, I will close with doing so...