I was volunteering again to be part of the set-up crew for Folsom Street East. My friend, Ben Marksman stopped by late enough in my shift that I brought him in to walk around a check out the set-up process for a bit. As we were walking, we came upon a S & M exhibitor who Ben remembered meeting about 5 years prior...for putting clothespins on Ben's then boyfriend. While Ben went over to talk to the exhibitor, I just stood there silently. The exhibitor then looks over at me, and taps the wooden X-shaped apparatus, and says to me, "You would look very good on this."

I've said before that S & M is not my thing, so my way of easing out of this was to use my wearing street clothes at the moment by replying, "Uh,...when I get undressed for the event, sure."

Ben laughed when he heard me say this, because he knew I was being full of it...Or was I?

As the event progressed, I walked around with Ben. At one point, we came near that S & M exhibitor again.   This is when my being too honest for my own damn good came to whip my ass literally. 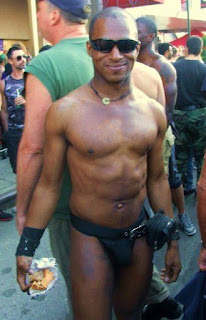 For I could have easily walked around the area, and the S & M exhibitor could have forgot all about me. But what do I do instead? I walk right into his sights, so he could motion for me. Why? Because like Jim Carrey's character in the movie "Liar, Liar", no matter how hard I tried, I couldn't lie. And I did say that once I got undressed for the event, that I would come by, and even though I was bullshitting, my conscience said, "You said it! Now do it, bitch!"

As subconsciously figured, the guy did motion for me, and so I gave myself to this flogging demonstration as promised. And the following video is the result.

Before I get back to the main idea of this post, there are a couple of things I must address...

1)With my skin color, plus the flogger being a light-complexioned Latino, I was well aware that someone who either doesn't take the time to realize that he was Latino, and/or is still stuck in time, could easily be taken back to thinking of slavery times as they see that whip hit my backside. So I was also well aware that some racist pricks were probably getting a chubby seeing this. Well, as you can see, even with those things in mind, I still threw myself into this experiment. For it's 2012, and there are times to stop letting that horrid past guide what you try in this present.
2)What the fuck is wrong with the 3 dumb mother fuckers who walked right into my flogging - the older guy, and the 2 queens?! The older guy, because of his age, I have no words for, since he should have known better. But as for the 2 latter queens (the bald dude in the rocker jeans and the guy with the man-purse), my use of the word "queens" is meant to be condescending. Because if drunkenness was the reason, then you shouldn't be that drunk, especially in public, to not realize you're bordering on walking into a harmful situation. And if your "queen" mentality has you thinking that because it's an gay event, you can walk wherever you want with no harm coming to you, remember it is only a gay event, and you are only human. You are not Superman. So if that whip hits you, that skin treatment you got at your favorite male spa will get undone with a well-deserved whelp.

As the saying goes, "No pain...no gain". Well, with this pain I did gain something. Knowledge - on a couple of things. For one, knowledge of my tolerance of pain when my adrenaline is pumping. My adrenaline was pumping because of the erotic performer is what you and all those other people were seeing. I was in no way turned on by those lashes to my back and ass. However, I was well aware that some people there, and those of you as you watched that video got a tingle in your cocks seeing my ass cheeks jiggle from the spanks and rides of the whip against my ass. There's no shame in admitting that you shifted your focus in order to bear watching the video. For I obviously shifted my focus to endure taking those lashes.

I HATE being bound because I want my body free to express my enjoyment of my partner.
I HATE to dominate or be dominated like in a pet/owner or parent/child relationship because we are adult human beings, and not to be one another's property. And
I HATE to so much as play cruel to my partner.

I think the main reason I gave myself to this demonstration is because subconsciously I wanted to know firsthand, if I was being too harsh in my summation of people who partake of such practices. That summation being that S & M being the result of someone taking verbal and/or physical abuse from their lives, and incorporating it into their sex lives as a coping mechanism. This is only natural for me to feel this way because I see sex as an act of beauty that brings pleasure to ALL parties. Not pain. And I find no pleasure in giving pain to or receiving pain from my partner(s). The only pain I will accept is that of either a dick entering my tight ass, or me bottoming for a very long time for a guy who I really want to be with. Otherwise, if pain as intense as that from flogging makes its way into the equation of what one constitutes as a sexual act, then one must ask themselves "why?"

When I told all this to another friend of mine, he said that he found it weird that someone as sexually liberated as myself to be so judgmental about BDSM. Now, I'm not one to reveal my "summations" publicly, even to friends, unless I can bet my life on how they're actually indisputable facts people want to call "theories" for the sake of once again - coping. This blog and debates I've gotten into afterwards are proof of that. And besides the fact that EVERY person I have met thus far who does S & M has abuse in their past, I couldn't find the exact words to defend my strong feelings about flogging, S & M, etc. then,...but I have them now...

...And the fact is there is a big difference between being sexually liberated and being accepting of yourself or someone else sexualizing a trauma to cope.

EVERY SINGLE PERSON when told of my being flogged at Folsom Street East asked me if it hurt. I initially found it to be a stupid question, because of course it hurt. But the fact is most who have not sexualized their trauma view sex as I do on some level - an act of beauty that brings pleasure to ALL parties. Not pain. And I find no pleasure in giving or receiving pain to my partner. For there is enough bullying and cruelty for overcompensation's sake in this world before and after sex with my partner. I have no desire to bring those negative things into my sexual unions, even if it's a one-night stand. For sex should be the time we allow our minds AND bodies to escape those negative behaviors, and feel instead the utmost bliss.

And in closing, speaking of bliss, can someone find out who that guy is in the black t-shirt sucking on that lollipop? 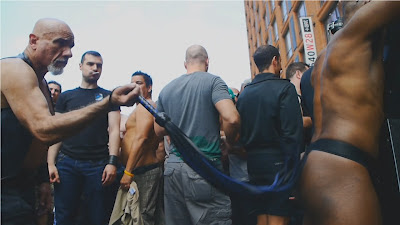 I had no idea someone that damn hot was looking at me. And since his sexy self seems to be enjoying the view so much, if you know him, let him know that he is welcome to a personal feeling and viewing of my ass....from overhead as he fucks me doggy-style. And if he must do pain, that he's only allowed the same pain I mentioned tolerating earlier. As long as he doesn't try to bring out whips and ropes to tie me up, ...I can see the next home sex video I want to make.