Pumping Inside You, Ice - The Last Fleshjack

Whether it's Brent Everett, Brent Corrigan, Pierre Bitch, I mean, Ftich, the Visconti Triplets, Bel Ami models, or Next Door Studio models - Fleshjack  is sticking to their light-complexioned color scheme. 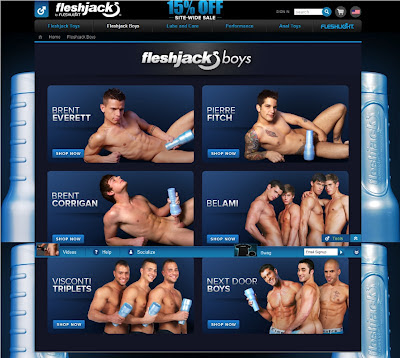 Bi-racial Austin Wilde was thrown in just for the sake of saying they're not racist. Which explains Race Cooper as the token dark-complexioned model in their "contest" for the next Fleshjack model.

So my feeling is if Fleshjack is going to dismiss the sexual prowess of people of natural color, (unlike those pasty white models who sit in a tanning bed, or get spray tanned), then why should I or any other person of color make their product look good with our home videos that Fleshjack never pays attention to?

The point is WE SHOULD NOT.

Since I am now at a point in my post-porn life where I could care less what response I get from them for the video I have made below, I'm sure many of you are wondering...why make this video? It's to make a point. This is my send-off to making videos of me using a Fleshjack or any other sex toy from a company run by racist pigs that refuse to show non-Whites AND darker men of color as valued costumers and sexually desirable representatives of their product.


For as you will see from this video, us non-Whites and darker men of color can be just as sexually arousing by our displaying the use of their products,...if not more so. ;-)