As the weekend is upon us, and we venture out into nightlife, one thing we are bound to see ---kept men and their sugar daddies.

The common term "kept men" is quite false, because the fact is that while they are "kept", the fact that they've allowed themselves to be kept makes them faaaarrr from being men. So while the more accurate term would be "kept faggot", I'll keep the same number of syllables by calling them "kept boys".

And the term sugar daddy isn't very accurate either, for sugar is natural product of sweet taste. And a sugar daddy is only "sweet" in the ugly, materialistic heart of a faggot looking to be kept. Allowing oneself to settle for this isn't much of a sign of maturity, therefore manhood. So we can't be right in calling them "old men" or "older men". Let's just call them "old guys", because while a "man" is someone special, a "guy" is nothing special.

You see them all over the bars and clubs. Either seeking each other out, or finally paired. The usual target for the wannabe-kept boy is an old White guy. For practically all cultures still in 2012 instill in their young that Whites have all the money. So if you're a non-White who hates not being white, DON'T. For not being White lessens the chance of that bullseye being painted all over you in a bad way by practically every culture on the planet to use you simply for what they can gain from your money, then throw you away. However, if you are older, not White, but have noticeable wealth, you will find yourself to be a target as well.

While the old guy targeted by the boy wanting to be kept is usually White, the boy wanting to be kept can be of any ethnicity. However, the ones usually successful at acquiring the old guy is usually of a light-complexioned ethnicity. This is because the old guy is a slave to what gay media still teaches of how light is the only beauty. I know I've said this numerous times before. But sadly, I will have no choice but to keep saying it until it is no longer true. Even though, once again, whether you are target to become the keeper or the kept, it is again more of a massive blessing to not be light.

However this relationship comes about, be it by a bar/club meeting, online, or on the job of a young guy fucking his older boss, or even by chance, the sad fact is many of these young guys gave dick to, or took dick from an older guy to get where they are. Some have become porn producers, nightlife promoters, DJs, actors, photographers, this list of occupations goes on and on. It happens so often, that until I learn the backstory of the person, I'm not an admirer of what they claim to have "accomplished". For what's to admire in someone who uses someone by using their bodies in the intimate act of sex in order to acquire what they want? Truth is there is nothing to admire. For it wasn't obtained in the most honorable way ----all on their own by THEIR OWN HARD WORK.

With that in mind, it should be no surprise that these relationship don't last long, and I'm sure drugs and/or alcohol play into the tale, and that includes marijuana, with increased usage the longer the "relationship" lasts. After all, both parties have to try numbing themselves to this loveless situation they've put themselves in. A situation where both are leeches. The kept guy is leeching off of the old guy's wealth and lifestyle, and the old guy is leeching off of his kept boy's youth. So they're living a so-called life of amassing material wealth, but at the expense of their mental, spiritual, and character wealth. Plus, you're both using someone, and as much you may try to overlook it, the longer the play the game, the harder Karma is going to bite both of you in the ass. Maybe to the point of taking some flesh off with her teeth.

Considering all this, whether you're considering being the keeper or the kept, is this the life that seems truly prosperous to you? I hope not. But if it does,... 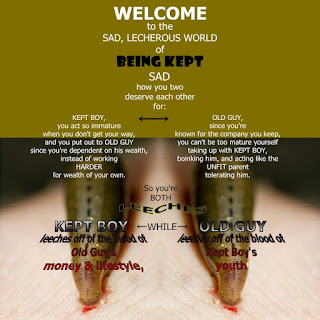