It has been raining quite a bit here in NYC lately. But that wasn't going to stop me from meeting up with this guy. We've seen each other online before, flirted, and mutual placed each other on our lists, with no meeting thus far. However, this time my psychic sense could tell something was different. Even though it had been months since we last saw each other online, I knew that this time, it was not going to be all talk. I knew this time,....we were going to fuck.

His profile said we was a versatile top, but tonight I had no interest in taking advantage of that versatility. My focus was on the part of his self-description that said "top". That's why the looping image that guided me through the streets on my walk to his place was the picture from his profile of him naked, with a zoom on his 3/4 hard cock. For his cock was the compass directing me where to go.

Once there, he greeted me with a smile. He looked even better in person. I love when that happens. Because it was only drizzling outside, I never used my umbrella. So he took my dry umbrella, and put it aside. Took off my jacket and started kissing me. He held me, telling me how sexy I was. And the feeling couldn't be more mutual.

I always let the other guy be the guide of where to touch. Because leave it up to me, my Aries impatience will take over, and I'll feverishly rip his clothes off, we'll start fucking with his rags hanging off of him, and I'd rip the rags off until he's completely naked while he's thrusting inside. So instead, I let him grope me. Once he went to my ass, being the ass-man that I am, I went to his. And his ass was so nice that you would re-think my original stance on his versatility, and try to fill and fuck his ass, but I didn't tonight. He was holding me close enough to him that my thigh grazed his crotch, and he was already getting hard. What I wasn't aware of was how big his hard-on was. That is until he guided my hands to feel it. He obviously went commando today, because his dick was unrestrained by underwear. So I got a handful of cock that felt like a fire hose was being inflated in his shorts. And there was a fire to put out, ----our horniness. But this hose was not going to put out the fire by spraying water. This hose needed to spray cum.

Would you believe with all that build, we didn't fuck right away? Instead he offered me a drink. I never know how to answer that question. So I asked for the easy thing, Vodka Cranberry. He gave me a regular glass full, then made his own drink. We cheered, then he went out to sit on a sofa on what turned out to be a terrace, and I followed. We then engaged in conversation. At one point, he noticed that I wasn't done with my drink. He said that he wanted me "relaxed". Now, we all know he didn't want me relaxed. It was my asshole he wanted relaxed. Well, knowing this, I finished off my drink, and we started making out again.

In the midst of our making out, he took one hand away from holding me, and undid his pants. I was kissing him with one eye open because I wanted to finally see the unveiling to the outdoors of the thick dick I felt through his shorts earlier. Once unveiled, I said, "Wow!"

Without delay, my hands went right to playing with it. Admiring the thickness of the shaft. Feeling the flesh of its head against my fingertips. And seeing how he had a circumcised dick sensitive enough that while most circumcised guys only moan from it, he actually moaned AND had little twitches when my finger grazed his frenulum. I felt my mouth watering to show him my oral prowess, so I went down on him.

Now, I was face to face with it. The attraction to him was so intense, I found myself wanting to put every last inch in my mouth. Even if that meant tasting pubes. I sucked his cock, and yes I'm blowing my own horn to say how good I was. I was so good that he throbbed in my mouth a number of times. Enough that I feared being too good. Because I thought he was going to shoot while in my mouth and not while inside my ass. I think he realized it as well. Which is probably why he guided me off his cock and back onto the sofa.

He then started taking his clothes off, then he laid me on my back and took off mine. So then we were both naked. And that's when it dawned on me that we were still on the terrace, I couldn't recall what building was across the street, but I didn't care. I then started to ask myself, "Are we going back inside?"

Once he started wetting his cock with a spit-lube, and putting it against my asshole, I got my answer. We were going to fuck right here on this terrace.

I've spoken numerous times here about my tight hole, and how it takes a lot of lube and 2 tries to get in. So explain to me how he slid his cock inside me with spit-lube on one try? I think we should blame that big glass of Vodka Cranberry proving me right in how it was meant to more so relax my asshole. Oh well, at least there wasn't that smell and it didn't give me a headache like what so many weak bottoming gays use,...those mother fuckin' poppers ---which I loathe.

So now he was fucking me missionary. His dick was the best kind for me. One that feels so good fucking me that I have to consciously remember to use my ass to fuck his dick in return. For you may also recall, when I bottom, I'm not one that just lays there. For my rule is "even as a bottom, I don't get fucked, we fuck each other".

We later changed positions. He wanted to spoon with me. So we laid there with his cock inside me, sliding back and forth, with me reaching back to massage his thighs and ass. Even with the tight grip my hole had on his dick, at times his dick still managed to slip out. I guess the alcohol I drank worked its magic, because he slipped back in effortlessly. While we were fucking it started to rain. Loud enough for us to hear, and enough for us to be hit with some drops. But we kept fucking anyway. I knew our elevating body heat would turn those tiny cold drops into steam as he said things to me like, "Oh, Baby! I love you ass!", "You feel so fuckin' good", and "God! You're going to make me cum soon."

And I wasn't lying. Like I said before, his cock felt just that good. Our sexual chemistry was so intense that he laid the kind of pipe, and I gave the kind of ass that makes you think you're in love after first fuck. Then the time had come for him to cum. That's when I could feel his already thick cock widening my hole even more than it already had just by him fucking me. It throbbed repeatedly, longer than any guy had before. And my classic routine of tightening my sphincter to milk a guy's dick of every last drop of man-milk made it throb and him moan even more.

At some point, the rain had stopped. But as we laid there a couple of minutes, the rain started again with little drops falling on us. We were done fucking, so you would think that as soon as those drops started falling on us that this time we would get up and run inside. But that was not the case. Instead, we still laid there spooning and basking in the afterglow of the intense sex we just had. As his dick slowly went flaccid, enough to slip out of my ass, we stayed spooning. as his cock now slipped to where it laid on my left ass cheek. 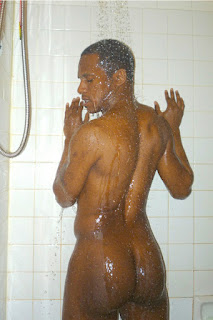 Once we finally got up to go back inside his apartment, the temperature outside seemed to suddenly drop. He began wondering how we were outside in that cool air. His question caused a flashback that interrupted the Kegels I was doing. For my sphincter twitched from remembering the milking I did of his dick just minutes before, and how I could easily do it again. I jokingly reminded him of how hot a fuck we gave each other, so our body temperatures were just then coming back to some level of normalcy. Afterwards, we took a shower together. We lathered each other up. I had to fondle his cock one last time. It was still looking quite large to be going flaccid. And I also grope his now wet juicy ass. We dried off, got dressed, and he walked a block with me as I headed home, because he was going to a nearby deli.

On my walk home, the fact of where I just had sex really started to sink in. I was on a terrace. Not a bedroom. Not even a living room like at the start of "Red Light". But a terrace. A terrace that, while I didn't hear anyone, could have very easily had an upstairs or downstairs neighbor sitting out there listening to our dirty talk and sex moans. Or the building in the distance to the left of the terrace in my direct line of view could have had someone with binoculars watching us. Yes, that's a stretch, but not at all impossible. Being the exhibitionist I am with no shame of mine or my partner's sexual prowess, nor shame of displaying our orientation, I could care less who heard or saw us. What fascinated me was the fact that I always wanted to have sex on a terrace, and in the rain. And my wishes were granted without even trying or expecting them to happen.

The next day was my performance at "Titillating Tongues". On my way home, I found a text message came while I was in the subway en route to the venue. It was from him. He wanted another go at me soon. Maybe this time, we'll fuck in the bedroom. ;-)
Posted by LeNair Xavier at 12:05 PM