My Sex Drive At Hard Drive

My action started early on after I got undressed and joined the party. I went to the back area where in the few times I've been there, most action seems to happen. And it turned out being that night was no different. Soon as I got back there, I saw this short Latino. He was totally naked with a nice round ass. I grazed his skin as he walked pass, and it made him take a look at me. He turned around, went straight for grabbing my cock. He began stroking it while my hands couldn't decide on whether to focus on his front or his back. For not only did he have a great ass, but he also was fit with a nice-sized dick as well. Even if his dick was small, if he showed himself to be a top, I would have bottomed for him. But I took his focus on my cock to mean that he was a bottom, so I lessened my playing with his chest, flat stomach, and nice uncut dick, and instead focused on the ass that I was getting more and more eager to enter. Hence why I equaled my focus on tickling his hole just much as massaging his soft and smooth ass cheeks. He then positioned himself in front of me, and put my dick to his ass. Now there was no doubt he wanted to bottom for me. So I dressed up his ass and my cock. I slid my dick into his ass and started fucking away.

I'm still not as confident of my sexual prowess as a top being as great as my being a bottom, but his moans were making me think I was just as good at both. Because this guy moaned so much that a crowd starting forming.

After my 1st ritual post-fuck wash of the night, I went upstairs. Hard Drive had as a featured guest that night---- Treasure Island Media exclusive Christian. Unlike some I'm sure, he wasn't the reason for my attending Hard Drive that night, but it was a good plus to keep me around. Especially since later on, he became Bottom #4 for me. But before him, there were Bottoms #s 2 and 3.

A tall, slim guy came upstairs, and he slowly made his way over to me. We started making out, stroking cocks, groping asses, and going down on each other. All this eventually led to him offering his ass for me to fuck. So he became Bottom #2. Briefly though, because the crowd around became too much for both of us. To the point that we couldn't just stop, and go somewhere else. Instead, we actually needed to walk around to get some air.

This led me back downstairs to the back area again. There was a guy being sucked off. I was standing there watching, and this short Asian with an amazing bubble-butt was standing with his back to me not too far away. He slowly made his way back towards me, and got in on the sucking action. And since he was so close, I grazed his skin. He turned his head just enough to see me, and moved more into my hand. So I started groping his ass. And the more I groped his ass, the more he leaned into it while simultaneously grabbing my cock to make it rock hard, which it quickly became without a doubt. Once rock hard, he wanted it. So he asked me to dress up his ass and my dick, and in I went making him Bottom #3. I couldn't help but start with passionate pounding because of those big round soft mounds on this little body. And it turned out he was like the Latino. Not only cute. Not only short. But also loud. I only fucked him for a couple of minutes for since I was standing in the middle of a crowd, I wasn't in the most comfortable position. Even though his ass did put me on the verge of cumming, if I come from fucking you, I want us very comfortable. My exhibitionist spirit being satisfied isn't enough. So I stopped, and though I do my post-fuck wash even after wearing a condom, I sensed some hot action was still going on, so I went to go check it out instead. 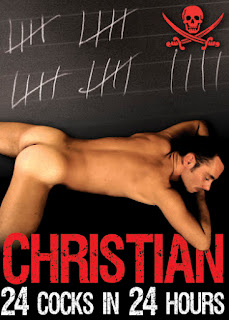 A couple of guys were in the corner fooling around with Christian. I got close enough to be near him. When he turned, and saw my hardening cock, he grabbed it, then started sucking my dick. One guy was going to fuck him, but couldn't. So since Christian pretty much prepped me to be next by sucking off (which considering how hesitant I am about getting blowjob, I must say he was damn good), he took hold of my dick, and put it in his ass. I was shocked by his eagerness to get fucked by me. For based on my seeing his online profile, he's a bit of a size-queen. But since he did put my cock in his ass, I took advantage, and pounded away.

And as you can see, my tweet didn't lie. the Hard Drive party was HOT.....And it was getting HOTTER.

For later I went upstairs, and I ran into the bubble-butt Asian again. Soon as he saw me, he went over to one of the chairs, and assumed the position. 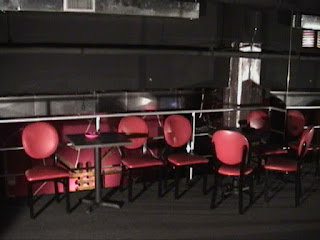 Now, because of his eagerness for 2nds, I was really on the verge of getting a swollen head. And I don't just mean the head of my dick. So I once again, dressed up his ass and my dick, and pounded away. I had wrapped my underwear around my shoulder, but my fast thrusts in that juicy ass kept making them slide off. So I threw them off to the nearby dark corner under some chairs. And since the underwear were dark brown, they blended in so no one with an underwear fetish could see and steal them, plus they were in eye-shot of me anyway. 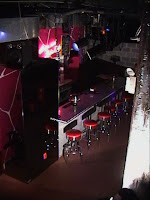 Anyway, another guy came around while I was fucking him. While I was fucking his ass, the Asian started sucking the guy's cock. That actually helped to muffle the Asian's loud moans that could have otherwise spread throughout the club. Due to the fact that the upstairs area is an open area where you can look out to the big lobby of the club, and we were right by that very railing. This time, I did fuck him longer. But once I stopped, the Asian breathed out a sigh of exhaustion saying, "Oh wow! Oh my god!"

The way he had my dick pulsating from that sweet ass of his, I 2nd those emotions.

Afterwards, I went back downstairs. And watched as things progressed to where this bald White guy was fucking this short White guy with a little mohawk. As I got closer to the action, the bald guy reached for my dick while he was fucking the one with the mohawk from behind. After they were done, the bald guy came to me. Since my 1st sight of him was him fucking the guy with the mohawk, I had no idea how big his dick was. But now I knew. While he was just a tad bit taller than me, his cock was thick as fuck.

This always seems to happen to me. I go to a sex party. If I bottom all night, I get a variety of cock sizes. But if I top all night, once I finally bottom, the guy topping me has a dick that is long and/or thick as hell. You know they say "be careful what you wish for". And after all the topping I was doing, I was craving to have someone lay some pipe in my ass. So I think this was Fate's way of saying, "You want to get fucked. Okay LeNair. Now, you're going to get FUCKED!!!!"

So the bald guy started fucked me missionary on this table, but it wasn't working for him. So I took him over to the corner, got into doggy-style position, and he banged the hell out of me. A lot longer than he did the guy with the mohawk. At times, I was tightening my sphincter as if I was trying to milk him of his load. Not because I wanted him to stop, because I didn't. I was just adding to the sensation of his hard cock sliding back and forth inside me. And you could tell it worked because of all the moans that sounded like he was getting to the point of no return. But even with all those moans, he never came.

Not too long after, I walked around a little, then came back to that area where a tall Black guy was sucking off the bald guy trying to make him come. I have no idea if he did, but I finally did watching. For I saw all of the bald guy that I could not see while he was fucked me. Like his tightening ass cheeks, and his sweat drenching his head, back, and ass.

After all this, with the party dying down, I went home. And I gave myself a well-earned rest.

During my train rides home after these escapades, I always wonder how written on my face and body language is the glow of sexual satisfaction. Can these people tell that I've been fucking like a rabbit? Well, if they can tell, then I'm sure they were wanting to know where I've been.