Me and Titillating Tongues

I was recently invited to be a featured performer at an erotica salon called "Titillating Tongues" held in the Huron Club inside the SoHo Playhouse. While I quickly accepted, and before I give you an idea of what I am planning for my allotted 10 minutes, there is a great story about what was going on when I received this invitation. For it almost made me miss this great opportunity.

By way of a Facebook update, I was venting about the massive flaws of gay media in which (to no surprise to my Facebook friends) I tagged various gay media sources to blame - Next Magazine being one of them. The next day, I got a reply comment from someone from Next Magazine making false accusations about my part in past magazines and blogs, leading him to call me a "hypocrite". Now, I'm not going to rehash all that was said between me and this person for it would ruin this great story, plus he's not worth such detailed time - not even revealing his name. However, I will say that I responded with a verbal attack that made him back off. But before him being a chicken shit and blocking me, he said to me, "...That's why no one listens to you..."

Really? No one listens to me?

Well, in the midst of my reading this guy's original comment, I got an email on Facebook. I took my time getting to reading the email, and almost completely ignored it because I thought that since it came so soon after the comment from this guy from Next Magazine that it was him saying something to me that he knew (1)subconsciously would make him look worse if the public saw it, and (2)it was going to make me go "Bed-Stuy ghetto" and verbally cut a bitch, which I publicly did anyway because of his comment.

It turns out I was for once WRONG...on both counts!

It turned out being that my apprehension was all for nothing. In fact, I should have opened the email before addressing the schmuck from Next Magazine. For the email was from Aimee Herman, a poet who hosts a monthly erotica salon called "Titillating Tongues" at the SoHo Playhouse's Huron Club. She was inviting me to be a featured performer for one of their upcoming shows. 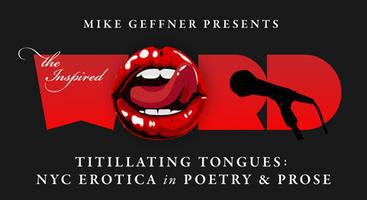 Well, I do believe that this proves to that guy, everyone else from those other superficial gay media sources, and their followers that there are people listening to me. Granted, it's about the enticing way I talk about sex, but if I'm that good a writer on the inner-workings of the natural act of sex to gain attention, then I feel my possibilities of more recognition and praise from those with a real purpose are endless.

The date I decided on is May 22nd. As for what to expect of my performance, I like challenging myself and doing something different. So I decided to do write a sexy a capella song entitled "Spoons In The Dark", which will be an intro to a burlesque performance of "Come To Me" by JC Chasez.


Well, because of my YouTube videos, you may have heard me sing, and sing what I've written, but never live. And in other videos, you've seen me dance, but you've never seen me do a striptease. So I am promising you an interesting night for my participation. Plus, it's open-mic afterwards, which leaves room for other erotically talented performers to be showcased , besides those of the featured performers like I will be. So I hope you'll come by to have the good time I'm sure you'll have. Which is why I will most definitely keep you posted on details such as regarding purchasing tickets.

Thanks for your continued support. :-)
Posted by LeNair Xavier at 10:01 PM