Hanging with the Guys At Brunch

Some of you may be wondering why me and Remy never worked together. Well, while I've always thought Remy Mars to be hot, I personally am glad that we were never put in a scene together. For from my perspective, our looks and body types are just so similar that us fucking each other would be like a Black version of those sick-in-the-head incestuous Peters Twins from Bel Ami.

Those of us old enough have for years seen Barbara Walters get the interviewee nice and comfy. The interviewee thinks the interview is going to be a breeze. Then she hits them with a question or name of someone from their past where you can tell the interviewee is thinking, "Oh shit! I was not expecting that!" Such a moment is what I define as an interviewer doing a "Barbara Walters". And some may even say doing an "Oprah". Either way, in the end, the interviewer gets the information they're seeking for their audience, and maybe even themselves. 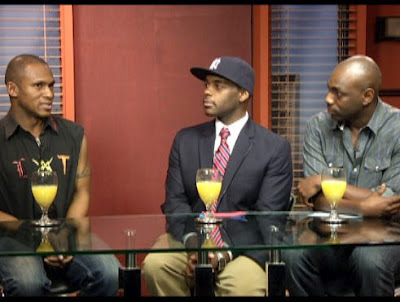 Well the hosts, Nicholas Garnett and Shawn Bradley knew that with me that I had no "off-limit" topic or name to discuss because of the bluntness I display on this blog. Therefore, if I experience a moment that I define as a "Barbara Walters", it's on me. Because I came onto the stage with a cool and shy demeanor. But underneath, I was itching to either call out an industry name(s), or respond to any said to me. Well, the interview was only 11 minutes long, but these guys are good enough that I got comfortable quickly. So with being at ease so quickly, I began feeling this was going to be a day I had no need to say or respond to a single name of one of my foes in the gay porn business. I was actually getting a tad disappointed. But that's when they sprung a name on me...

Of course, as you'll see, I didn't hold back. It was just more of a joke to myself where I thought, "Oooo shit! They just did a 'Barbara Walters' on me". I think the change of camera allowed my shock to not be seen by you, but I'm honest enough to let you know, it probably was all over my face. LOL

Later on, I discovered that on public access there are certain words you can't say. So once that was said, I knew in editing for television, at least one thing I said got bleeped out. Oops! Also, in advance, please forgive my stammering. It was due to the fact that my brain was keeping 2 large mental notes at once:
1) speaking my truth but being as brief and to the point as possible, which is a hell of a task for a writer like myself, and
2) the reason I needed to be brief and poignant, ---the time constraint.

Now that you've seen the interview. How did I do?
And not just me. Go to the Guys At Brunch YouTube channel, and leave some comments for Nicholas and Shawn.
Posted by LeNair Xavier at 6:50 AM