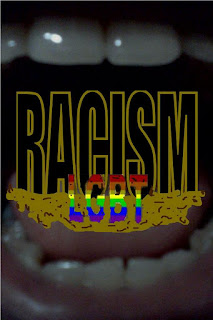 With the racism affecting so many place especially within the gay community, at "Saying The Dirty Word....LIVE!", we weren't able to cover every facet of where racism is displayed as much as I wanted to.

One thing I didn't get to explore as much as I would have liked was online hook-ups and dating. I did get to say one part of what I wanted to say on the matter with gays always using the excuse "it's just a preference" when they say, "No ______", and fill in the blank with the name of a certain race. What I said was in the same vein of a comment I made recently on Facebook replying to another comment to mutual Facebook friend's status update about racism. I had to call this person out on his ignorance on how he was living in denial of his own racism. I pretty much told him that we all have a preference, but to make yourself blind to the sexual beauty of a race to the point of TOTALLY writing them off by saying "No _______s" is an act of racism. No "if"s "and"s or "but"s about it.

And if you've followed me for any length of time, then you know that I've had to overcome my racism towards other Black males. And based on the overcompensating dominating behavior that I pointed out in Part 1, it is still an issue I struggle with. However, I do know that there are some decent Black males out there just like with any other ethnicity, and I am more and more making myself open to trysts and maybe even romances with them. So I know from what I speak on this issue.

Another thing that I didn't get to tap as much into as I would have liked is about how gay media perpetuates the idea that Whites are the all-knowledgeable and all-beautiful of our community. With photographers who instead of diversifying, instead follow suit by making Whites and those of light-complexions their main photo subjects. This is what I hinted at in Part 1 that if allotted the time, I would have explored further because of Dennis Chin's great point.

Gay media, which is mostly run by Whites, acts as if minorities' place is to be followers, and never rise much beyond that position. This is a point I once brought forth in an exchange with The Advocate's Editor-In-Chief, Matthew Breen. He tried to smooth it over to say that in one of the magazine's issue presenting a list that Blacks were included. This was NOT acceptable to me, and it shouldn't be to you either.

Because as I responded, I want to know when is a Black going to be shown as a great enough member of the LGBT community to not be thrown in a pile, but instead be the cover story of a magazine like The Advocate, Instinct, or Out for their great contributions? Or when is Logo going to tap a person of color to become the sole host of a show that shows their knowledge about sex, life, and/or love? More specifically, one of medium to dark-complexion, instead of the light-complexions they use to simultaneously not "mess up" the light color scheme too much and try to avoid a much deserved charge of racism. For we too have the knowledge, but these media outlets refuse to let us shine fully, so they give us micro-seconds of spotlight flashes instead.

Instinct Magazine tried to give me attitude via Twitter when I made this charge at them by saying they do give people of color praise. Sure. They gave me this attitude when their cover model was Rodiney Santiago of the most negative gay stereotyping show on television, "The A-List: New York" AND when you can easily go to the photo album of their Facebook page and see their minimal number of Black cover models.

The racists are out there sending letters and writing emails to the powers-that-be with the hopes of keeping their racist imagery alive. If you are a person of color, how dare you complain about how wrong the powers-that-be are for not representing you (in a good light, if at all) when you've made no attempt to contact the powers-that-be, but instead all you've done is sit in a corner and moan to yourself? If you want to see that long overdue change, then write your letters, write your emails, don't go to their events, and write letters and emails telling them why they're unfit to have your dollars.

And if you feel one or more of my blog posts on the matter of racism says what you want to say, then feel free to flood their mailboxes with forwarded emails and printed out copies. Let's bring the narrow-minds and racist trash that is heading gay media into the present day. A present day where ALL ethnicities, colors, and shades are to be represented in what they do. Or else, see their supposed empires crumble by our lack of support, as many try lying to themselves that they are not. Because for their dismissal and ignoring our presence, Karma has made them rightfully on the brink of that crumbling.

And call me "sadistic", but I feel no mercy for them.

To be honest, I was disappointed by the turnout at "Saying The Dirty Word....LIVE!". It was a nice number for that size room, but considering how widespread a problem this is in our community, that room should have been filled to the point of it being a fire hazard and beyond. So this makes me ask, 'Why did people stay away?' Was it because you were worried about your racially insensitive friends calling you "angry"?

When I was first approached about doing "Saying The Dirty Word....LIVE!", I was asked to bring others into it. Well, I don't know any porn actors to bring in it because they have an "every man for himself" mentality - and I use the term "man" loosely because of that mindset. And as far as bloggers go, I parted ways with a White one for being racially insensitive enough to call me "angry", and the Black bloggers I know don't deal with the issue enough (if at all) on their blog for me to consider them allies in this effort. It's as if they keep their blog's heart light so they can keep peace with White.

The problem is I know so many of us have experienced racism or seem it in one form or another that few who live in NYC have good excuses for not being there. And if you can answer "yes" to any of the aforementioned scenarios as to what kept you away, then you need  to grow up. You need to STOP acting like you're still in high school caving in to "peer pressure". Because before you know it, Karma is going to have you, the racists, and those catering to the racist mindset being either that lonely old man trying to get some young and beautiful tail that justifiably doesn't want you back as you sit lurking in the dark corner a bar or club, or searching on Rentboy, RentMen, etc. With the only reason you're free to be yourself being because the "friend(s)" you were so busy pleasing before, you either had a falling out with, they moved away, or died. OR you'll be stuck in a relationship founded on your racism that you'll be miserable in. Either way, by then, it's too little, too late. And justifiably so, no one should give a damn about your well-deserved, self-imposed prison of loneliness. If you think I'm wrong about your foreseeable future, you'll be the one wrong. After all, there's a reason I'm 40 going on 41, ....and don't look it. So I strongly advise you to get your shit together.

The reason people of color are given such minimal exposure in any of these situations, be it porn, nightlife, media, etc. is the modern-day "slave owner" mentality that is meant for us people of color to feel powerless. And from what I see, pathetically most people of color have adopted the mindset of  weakness, "if you can't beat 'em, join 'em". Hence why some of my fellow people of color are quick to join light-complexioned races in calling me "angry". The truth is the opposite is the case, and we all need to start taking advantage of our power if this is at all going to change.

"Saying The Dirty Word...LIVE!" was one way. This blog and others like it are another. What's your way?
Posted by LeNair Xavier at 2:05 PM

Email ThisBlogThis!Share to TwitterShare to FacebookShare to Pinterest
Labels: The Dirty Word Report