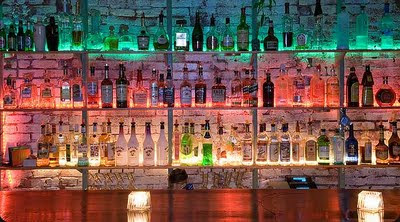 Look at that! Isn't it beautiful? The beautiful colors of a bar.
The properly placed bottles to show off the gorgeous variety of shapes and colors of the liquors. And in some bars, beautifully colored lighting around those bottles meant to enhance those shapes and colors.
Sad thing is there is a fool born not every minute, but every second that falls prey to those ingredients of appeal.
A couple of weeks ago, a friend had a birthday celebration at his place. We were all drinking, but after the cab ride we took to attempt to go to a bar, I found myself very much wasted the same way I was in "Fucked Up & Fucked So". And like in that blog post, I found my body rejecting the alcohol by constantly vomiting. Considering the fact of how I can actually put away a good number of drinks if I want, but choose not to, this new incident of drunkenness made me ask myself as to why when I get that wasted can my body no longer hold in alcohol, meanwhile others hold in the liquors and end up doing something stupid, like being belligerent to those in their circle of friends and loved ones.
Well, I may have very well figured it out. It's probably because I unlike them am a social drinker, while others are drinking for the reason most people do ---out of escapism.
There are sometimes when I'll go to a bar and won't drink at all. I just simply went there to get out of the house, get the energy of other people around me, and nothing more. If I do drink, I'll have an attitude similar to the one I've had in most of my drug experimentations of "well, since it's there...whatever." Then I'll proceed to ask for one of the most simple drinks or weakest beer. I do this because I'm not drinking for the sake of escapism. And I think my vomiting is for the same reason. It's because since I'm not using alcohol for escapism's sake, my body has no desire to hold on to a strong liquor.
You see, I am no different than anybody else when it comes to having problems. I have aplenty. But unlike aplenty of people, I don't run to alcohol, drugs, and/or even sex as tools for escape. If I do use sex, nowadays it's in the form of masturbation, because I've reached a point of maturity where I don't like to involve others in my form of temporarily getting away. I already know others suffer like I do. But to avoid bad karma, I have no need to show myself living by the credo "misery loves company" by using another person's presence to drink, snort, shoot up, pill-pop, fuck, suck, or lick the pain away. I'd much rather suffer, pray and figure out my way to a brighter tomorrow alone, because whatever doesn't kill you makes you stronger. And having the strength to go it alone without a controlled substance or sexual intercourse as a crutch makes you even stronger.
That previous paragraph may make me seem as if I think I'm some kind of saint. Trust me, if you've read of my sexual exploits, you know that I am far from that. But I have made my mistakes and have learned from them. Such as using sex with someone as a crutch.
Whether your crutch is sex, drugs, and/or alcohol, there's a reason to rethink using these crutches. If more people consider these reasons, they wouldn't use them as much. Or maybe not at all:
1) Blackouts - It's no fun being unable to recall your actions. Because if you don't (or can't) become self-aware of your bad history by saying you lived it, you are doomed to repeat it;
2) Hangovers - that headache after heavy drinking is no fun either. Especially for an Aries like myself. Since the body part that rules an Aries is the head, a headache to us is like Kryptonite to Superman. And the worst the headache, the more weakening the Kryptonite is to the Superman we think we are.
In all seriousness, the real problem here is that while social drinkers like myself are more likely to throw up the alcohol, thereby lessen the impact of a hangover, those who drink out of escapism will be more likely to suffer a hangover because their bodies hold on to the alcohol. For the simple reason that the alcohol is their believed tool of escaping their problem. When in all actuality it's not. This leads to why before you think of getting wasted, you need to ask your problems...
3) Going somewhere? - Because the answer will be an echoing "NO!!!!" All due, Einstein, to the undeniable fact that whatever problem you called yourself running from,...it's still going to be there when you come down from your high or booze binge. And in your foolishness, you've actually added
4) Regrets to your list.  Giving yourself more problems by all the apologies you have to now give out for what you may have said  or did because of your drunken lushy state....Congratulations, Dumb-ass!!!
What I have said here may seem harsh, but it is a harshness that's necessary. And I know this because I have used it on myself. In my moments of drunkenness, I have lost memories of fragments of time, my vomiting lessened the impact of a hangover, and do have regrets because while I may not have become a belligerent drunk, I do regret putting my friends in a situation where they had to take care of me by doing things like helping me to simply walk out of a bar. So the only thing on the list that I didn't have to deal with is me deluding myself that my problems were going anywhere. 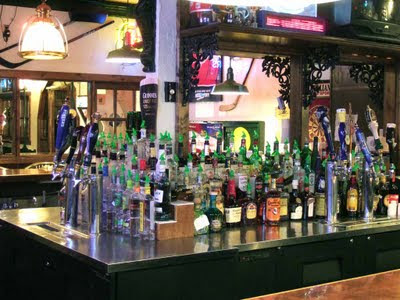 Now, are all these pretty shapes and colors worth the list of prices one must pay for trying to run away from the problems life might throw your way?
Next time you go to a bar, take a drug, or use a lay to attempt to be an escape...um, artist, you might want to think about that list.
Posted by LeNair Xavier at 2:01 AM

Email ThisBlogThis!Share to TwitterShare to FacebookShare to Pinterest
Labels: Gotta Kick Myself, Posts of Intervention, Provoked Re-Iterations, Word Of Advice