The following post was not written by me. But instead by my friend, Ben Marksman. If the name sounds familiar to my loyal readers, it's because Ben Marksman was the director of one of my last and favorite of my porn films, "All Out Assault". Since filming "All Out Assault", me and Ben have remained good friends, and we often share wisdom on various matters to the point where we find ourselves preaching to the choir. And this post is pretty much no different.
It came about in a recent conversation I had with Ben about someone I was repeatedly trying to go on an outing with, yet the guy seemed to be dragging his feet to make it happen. When I made the point of how with my busy schedule I was putting forth the effort, so why wasn't he, Ben mentioned the "Greener grass..." complex being a very possible factor. Once said, a lightbulb came on for me, and I so realized that Ben might be onto something, that I asked him to share that wisdom by writing a post on the matter. So I give you the wisdom of Ben Marksman...
Gay Marriage And Greener Grass 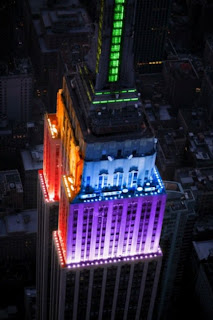 So now that the dust has settled a bit in New York on the topic of gay marriage, I gave a lot of thought into what this really means for the gay male here in our fair city. My first thought is that Lesbians will most likely be the primary advantage takers of this new law, more so than gay male couples because gay men seem to be less interested in the idea of commitment. As a gay man, I had to really look at my fellow gay brothers and figure out why this is.
Now look, if you want to spend your life unattached, going from man to man, that is okay... as long as you're protecting yourself and your partner. There is nothing wrong with reveling in your sexuality.  However, it does make me wonder why so many gay men jump in and out of relationships so quickly.
The answer: most gay men really don't want a real relationship or understand what a relationship really means. Oh yeah, you're going to jump down my throat for this, but ask yourself some questions:
(1)Do you claim to be in love with someone after 2 weeks?
(2)Have you had a relationship that lasted more than three years?
(3)Have you started dating someone within a few days or a couple of weeks after you broke up with a person you "loved," only to be "in love" with the new guy two weeks into that "relationship?"
Chances are many of you are wincing because you either noticed yourself or you recognized the pattern in friends around you. So why is it that gay men (for the most part) can't really make a lasting, supportive, monogamous commitment to another man?
It may have something to do with the "Grass is always greener over there" complex. Many gay men may have the most beautiful boyfriend with the best body, best face, biggest dick, tightest ass, best car, best job, most wonderful sense of humor, be the most caring and supportive person in the world, etcetera, etcetera, etcetera...
Yet, so many gay men will just turn around and throw it away for a tryst with another guy who may not even measure up to the perfect standards of their current boyfriend.  This person may be you, or the lover who cheated on you.  This constant need to always want something more, different, "better," bigger is ultimately self-defeating if you really want to be in a loving long term relationship.
Here's the deal folks - a real relationship is based on honesty and real love can take many months to actually GROW. It can take time, sacrifice, patience and if it is with the right person and what you REALLY want, you are going to have to work at it and not throw IT, or the person of the week or month away. Maybe if gay men realize that now that they have the legal right to marry here in New York, they may think twice about the consequences of bailing out of a "relationship," because now there can indeed be consequences!
Oh yeah, GAY DIVORCE!
There goes your home and possessions, income and more with alimony payments, legal fees and never getting rid of that partner so free and clear.
So think twice about what you really want before you jump into a relationship that is one in name only, and be more honest about what you think you want, and if you do decide that you really want to be in a real long term committed relationship, understand what it really requires.
Posted by LeNair Xavier at 8:55 AM