On Sunday, I posted this question on the website Formspring:

On Twitter, you post something negative ABOUT someone, and you're brave enough to tag that someone in your post. Neither of you follow each other. That is, UNTIL that someone decides to become a follower of yours. What does that say about his/her psyche?

I decided that I would give an answer to my own question, once someone else replies. And since someone did, I will now give my assessment.


I noticed this behavior first from someone at Rentboy.com after writing about my boycotting Hustlaball. Then earlier this year from Diesel Washington. And now, after posting tweets about his behavior this past Thursday, I found myself being followed by T.J. Kelly from "The A-List: New York". 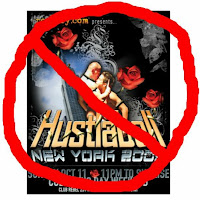 It has happened other times, but those are the easier names to use as examples. It has happened so often that I started thinking, what would make one feel the need to follow me after I've insulted them and/or the people they are associated with?
My questioning their behavior stems from the fact that I've had no desire whatsoever to reciprocate the follow. And why not?

Because I either don't like these people, and/or care for who/what they are associated with.

Therefore, it's understandable as to why I don't want to see their names pop up in my timeline when I go to Twitter. So it's equally understandable why I need to question their behavior. And I've concluded that there are 2 possibilities as to what motivates them to follow me, even for a short length of time.

One possibility is the fact that contrary to what these people may say or do against you, something in them (maybe subconsciously) applauds what you stand for. The reason they take this silent road of showing that admiration is because to say so openly would be them admitting to the fact of how they are not totally content with themselves and/or their connections for exhibiting the behavior that caused you to speak ill of them in the first place. So it's really just a matter of pride. Of course, there is a very simple way for them to not be in this predicament of secretly admiring your stand for the right...stop behaving in an unseemly manner, or sever the ties with whoever/whatever instigates the behavior that is unseemly.

The other possibility may be acted upon alone, or in conjunction with the first. That possibility being how that individual hasn't grown up. Somewhere inside them, they are still like a teenager in high school caring massively about others' approval. The way this gets in conjunction with the 1st possible motive is because they may be seeking your approval because of their (conscious or subconscious) admiration of you.

For the record, T.J. Kelly and myself have not had an exchange via Twitter or otherwise since last Thursday at The Monster. But it would not surprise me that after word of this post gets out, I'll lose him as a follower. And my self-esteem is not dependent upon big Twitter numbers, so that would be no skin off my back.

In the case of Diesel Washington, he stopped following soon after our Twitter exchange that sparked his following me. But the fact that he felt the need to do so even for a short length of time says something.

As far as the person from Rentboy.com, that was so long ago, there's no way in hell that I am going to go search through my over 500 followers and see if he's still following me.

Now, I am not saying that I am any better than any of these people, or anyone else who has done this...at least not for this reason. If they, you or anyone else feels that is what I'm doing, then that's that person's guilt over their self-esteem issue. And self-esteem is the bottom line. For we all have our flaws. Some crack in our self-esteem that can be furthered. Some bigger than others. My point of this post is to point out that because we live in the age of social networking websites like Twitter, Facebook, MySpace, Formspring, etc., we must be mindful of how we expose ourselves, and how it can be construed. Because to a deep-thinker like myself,...

Posted by LeNair Xavier at 8:22 PM