We are in the midst of a 3-day weekend. And it makes perfect sense as to why wherever I hang out this weekend, I'll be hanging out in close to nothing.

I was already at the latest Milk Chocolate Party NYC last night, trying to be the usual party motivational fucker. I haven't attended one of their parties for awhile, so I alot of making up to. Well, I kind of did just that since I did played with 4 guys. Sucked 1, topped 2, and bottomed for 1.

I've had sex with the guy I bottomed for before. He's a Latino with a massively thick cock. so huge that the Kegels I am doing as I write this post are a MUST. But after the usual 2 tries, he got inside me and fucked the hell out of me in missionary position, and whenever he stopped moving, I grinded on his cock. It was such an intense fuck that I found myself getting a headache. And not from my head hitting anything either. I think it was because his wet and sweaty muscular body on top of me was just blowing my mind so. Not too long after, the party shut down, and I called it a night. And I needed to, because my ass needed a break since I knew I'd be coming back the next night. 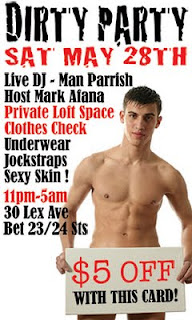 Tonight, I'll be at the same space but being an actual volunteer for a different party. The guys who bring you Sperm Sundays at The Cock are hosting a party that night. Appropriately enough named, "DIRTY PARTY".

Good thing I'm well-rested from last night. Because even though I'll be on duty, one never knows what can happen at these things. You walk in saying, "I'm going to be a good boy tonight." The next thing you know, you are being a good boy. It just happens to be that all of your behavior shows that you are a good boy.... in the sack.

Tomorrow night, it should be no surprise that you'll find me enjoying my underwear fetish by donning a pair of skimpy skivvies, and looking at all the cute boys in their undies at Daniel Nardicio's CAMP BUCK Underwear Party at Rockbar. The "Camp" is referring to it being a Special Boy Scout Edition. 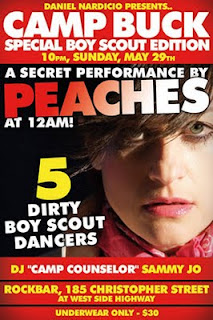 You see, while I can go for a guy in uniform, what has me drooling is the thought of seeing how many guys could look better OUT of that uniform. Because with some guys, clothes are such a distraction from their sex appeal that less is more.

And as an added bonus to at midinght, there are plans for a secret performance by Peaches of "Fuck The Pain Away" fame.

With plans like these, there is no doubt that I will be fleeing out of my clothes this Fleet Week weekend. So in whatever state of dress you see me in this weekend, be sure to say "Hi"....