I have nothing against females in bars/clubs with an intended patronage of gay males. Especially if those females are lesbians. While I don't think it should be a factor, I think it might be my bisexuality that makes me so welcoming to females. However, while other gay males scoff at the sight of any female walking through the door or a gay male bar or club, my welcoming nature to females is quite often tested. And not by lesbians...

...Instead by straight females.

I have found straight females who come into gay bars/clubs catering to males for the most part to be some of the most rude creatures on the planet. Mainly because they so often come in with the queeniest of gay males. And since you are known for the company that you keep, most of these queenie-acting gay males are rude, acting as if they have some degree of entitlement where you must move if you are in their path, and realize that they are there even if your back is turned. Now how am I suppose to know that they're there? Their scent? Well, in that case I'll be more than glad to move because their sense of entitlement...makes them wreak of bullshit. And the females that are their fag-hags are no better. Now, with self-esteem that low that they would want me to move for that reason, it's no wonder the guys or these straight females are not liked. The bar staff only pretends to like them because it's their job to do so.

I however, am in the position of being able to be brutally honest.

Recently, I went to The Cock and found not 1, but 2 straight females whose behavior totally made this a post for my "Space Invaders" category. It was Wednesday where they have the Best Ass Contest, and this female was obviously drunk off her ass. She entered, and she was a welcomed addition by both the host, Logan Hardcore and the audience...at first . But as the night progressed, she made a total spectacle of herself. Dancing on what is considered a stage at The Cock by doing everything from taking off her top to smacking mercilessly on the go-go boy's scrumptious ass. And yes, I'm jealous, because being the ass-man that I am, and the ass that he has, I should be spanking it - but not like a psycho the way she was. Anyway, she then she looked over at me, and noticed my jumpsuit, which was actually the same jumpsuit that I wore in my promo pic for my poetry reading of "The Industry". 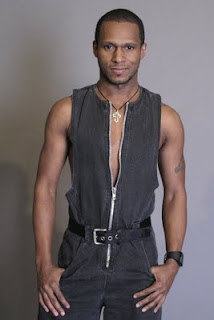 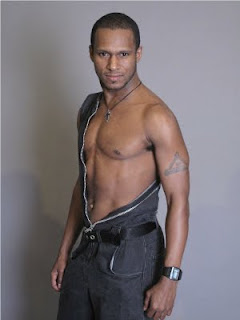 She told me that she liked it. As her drunkenness progressed she came over again, and decided to play with my zipper. I allowed it. That is until she played with my zipper just as recklessly as she smacked the go-go boy's ass earlier. For this time, her recklessness resulted in one of my chest hairs getting yanked out by the zipper.
Can you say, "Mother fuckin' OUCH!"?

Needless to say, for obvious reasons that was my last dealing with her.

The other straight girl at The Cock that night came to me out of nowhere. She had this strange look in her eyes. And she immediately started pushing up on me. I looked at her and said, "Hello".

She then responds by saying, "I want you to fuck me."

She repeated, "I want you to fuck me." 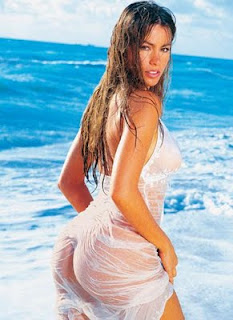 This had me wondering as to whether or not they brought back the Ashton Kutcher show "Punk'd". And if they did, then I had so much waaaaaay better celebrity status than I thought that I was chosen to be the latest target of a prank. But sadly, such was not the case. What's so sad about it was because this girl was for real. I don't know whether she wanted me to take her to the bathroom, back to my place, or hers. But either way, she wanted my cock in her hungry pussy. The problem being that my cock was by no means hungry for her in return. I won't say because she was ugly, because she wasn't. She just wasn't the type of female that could spark the straight part of my bisexuality like Sofia Vergara could. It was her approach. And I let that be known to her.

I told her straight up (no pun intended), "No."

She asked, "Are you gay?". Well, besides the fact that we are in a gay bar, I felt she approached me because just like a gay male can find another with "gaydar", her wanting to be fucked made her able to find a guy in a gay bar who is (no matter how small) some degree of straight.

Anyway, I replied with the truth, "Actually, I'm bi. But I'm alot more gay than straight."

"So what's the problem?"

"It's your approach. Even if you were a guy, I require to be approached with a little more subtlety. You know, lead up to it."

She then left me alone. But she came back, not once, but twice. So that 2nd return made it 3 times that I had to turn her away. And being that I have a "3-strikes" rule, I had no choice but to make it CRYSTAL clear that she was bothering me.

She came up to me, once again with a glazed look in her eyes leaning into me. I made myself totally unresponsive. And I finally made it clear by calmly saying, "Can you stop?"

She tried to play innocent by replying, "What?"

I said, "You're being intrusive upon my personal space, and I don't take well to that." Which is true if you recall what almost happened in my last "Space Invaders" post.

Still trying with the innocence tone, she said, "Why are you being so mean to me?"

"Excuse me?! You've been invading my personal space from the moment you approached me. So to respond to you like this, ...I'm actually being very polite." Which is true as well, because her gender was her saving grace.

She mumbled something, but when I saw she moved with just enough room for my small frame to squeeze by, I took advantage, and walked away. Feeling sorry for her, but knowing that it had to be done.

When I told my friends of this incident, they had various takes on it. All of which made sense. Some say she wanted a challenge. Others said she was either high or drunk. Well, whether it was one of those, or some combination, she crossed a line for me. For I hate when people show low self-esteem, and approach me to be the loathsome self-serving creature that enables you to continue being as such. The way 2 guys took the previously mentioned annoying straight girl into the bathroom and did God knows what with her. Maybe got high with her? Maybe fucked her? Either way, they took advantage of her low self-esteem, and her theirs.

I LOVE having females around me. I have great admiration for their ability to read body language, and give a listening ear for one to vent. But it's actions like these from these straight girls that provoked the poem I working on about sexism in the gay community to be more specifically targeted towards welcoming lesbians into gay male-dominated environments and not straight females. I am by no means saying all straight females in a gay male-dominated bar/club are going to make fools of themselves, therefore make themselves invaders to a gay men's space. For the straight women that are my friends have enough class to not go that route. Unfortunately though, those seem to be becoming more and more a minority.

So my advice to straight girls like these mentioned here....EASE UP ON THE BOOZE AND GET THE CLUES!
Posted by LeNair Xavier at 8:35 PM

Email ThisBlogThis!Share to TwitterShare to FacebookShare to Pinterest
Labels: Space Invaders, The Cock