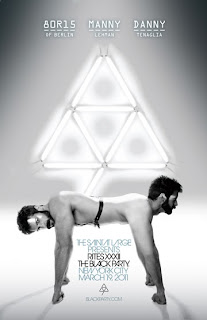 This is another year that I'm not going to the Black Party. And it's not so much about boycotting over the lack of representation of the sexual beauty of all fit bodies amongst non-Whites. Besides, the guys at Saint At Large already told on themselves by making the theme this year be about of all things ---CLONES. For clones are creatures with little to no sense of individuality. Therefore, they always follow the road that they are taught, and practically never strike out to find a road of their own.

And we all know how that doesn't describe me at all.

This year however, my staying away has in addition, the fact of how one should be more reasonable, and not allowing myself to be a clone by buying into all the hype. I've experienced the Black Party enough times before, so I know from whence I speak when I point out these facts:

Each of my trips to the Black Party have been nothing more than waiting on a long line, occasional dancing on the dancefloor, venturing to the backroom, and with such a high-priced ticket still having to pay for drinks. I'm sure many of you can testify to the same. That is if you're not getting high as a kite and/or drunk as a skunk the first chance you get.

So with SEX being the main thing on the menu, I'm going an alternate route like I did last year. And if you recall, I had quite a good time last year. So I thought I'd recommend some sex parties that I know will be happening Black Party weekend that you can combine with or without the Black Party, but partake in some fashion that will make sure that your weekend winds up just as (or maybe more) thrilling as the Black Party is hyped to be.

Friday night, there's EDGE which I have volunteered at. And with this being Black Party weekend, I'm sure will be filled with hot out-of-towners.

Also on Friday night is a new party for poz guys called the NYC Poz Party. The host is the same host as that of the Hot Jock Party, which I have written about in past blog posts. With the hot crowd that frequents the Hot Jock Party, I'm sure the host will make the same thing happen for this party. So if you're sexy, fit, and poz, send an email with your info AND pics to get on the list.

If you want to get off closer to the time of the Black Party, then you can go to the Milk Chocolate NYC Hot Body Men's Party on March 19th from 8 PM - 2 AM. I've had some HOT action there in the past. Hot enough for me to make an entire category dedicated to the tales of my time there, so with all the hotties in town for the Black Party, you'll have an even wider selection than the ones I've had to choose from in my adventures. 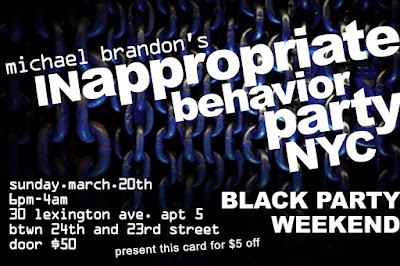 .
However, I might also just want to chill at The Cock's Sunday night party, Sperm. Either one is sure to make for a crazy night. It's just a matter of after what I'll probably do Friday and Saturday, which degree of crazy will my body be in the mood for come Sunday. Of course, I could do both since the INappropriate Behavior Party goes from 6 PM - 4 AM, while Sperm at The Cock goes from 11 PM - 4 AM.

So as you can see, I have some sexy ideas to mull over for the weekend. Maybe I'll see you at one or more of these events. Whatever you do, enjoy and be safe. ;-)
Posted by LeNair Xavier at 12:05 PM