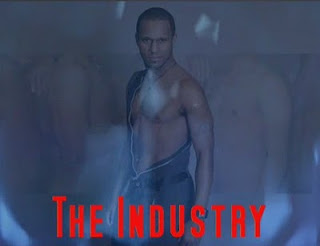 Last Friday, I finally presented to the public my poetry series, "The Industry" at the LGBT Center. With some friends stopping by to show their support, meeting some online friends face-to-face for the first time, and considering the snowfall earlier in the day, I was pleased by the turnout. Especially since that night was (as said in the press release) the swan song of my "Tré Xavier" persona.
I was totally ready, willing, and able to bid the "Tré Xavier" persona "farewell". However, there were a few things I was not prepared for. Such as the fact that by exposing some of what's wrong in the porn industry, which could be considered a "fantasy machine", while I knew it would bring forth a lot of questions because of that, I didn't realize it would bring forth such in-depth discussions amongst the audience that we would go over the amount of time I had planned for the Q & A in between each poem. And that's not a bad thing. It showed me that even in poetry form, it is still my writing, and I pride myself on doing writing that inspires people to think, look beyond the surface, and don't accept so many things "just because". Hence the logo in the banner for this blog. 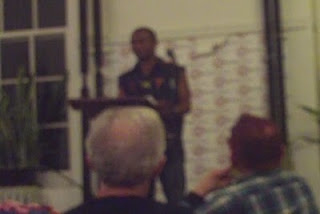 
Another heated moment came about between Diesel Washington and myself as he tried to make my moment his. Actually, he was the one heated. I was the one hyped, and I took a sadistic pleasure from his getting heated. But I will get into those details in Part 2.


So in the meantime, here are the poems of "The Industry". I know the video is blurry and the sound quality isn't the best, but with my nerves about this being my first poetry reading, my usual technological know-how was blocked. I hope my video editing afterwards and most importantly, the poetry itself  - make you well-compensated for your time thus far.

A heartfelt THANKS to MACT/NY, the LGBT Center, and all of the audience members who came out to show an appreciation for what I have done, love to do, and plan on continuing to do.

Email ThisBlogThis!Share to TwitterShare to FacebookShare to Pinterest
Labels: Note of THANKS, Promotion, Provoked Re-Iterations