When I first started to learn of the Ukrainian boyband, Kazaky, it was by seeing various posts on Facebook of their video, "In The Middle". Seeing the same still that you are seeing below, I was wondering why am I seeing this everywhere. It looks like a silhouette of 4 girls. Wondering if this was another case of so many gays being naive enough to go crazy over straight women who exploit gay dollars , then remembering how one posting didn't just say their name, but also mentioned that they were a boyband, then realizing that it would only take about 2 1/2 minutes of my time to investigate, I decided to give it a try.

After those 2 1/2 minutes, I became another guy who wanted more. 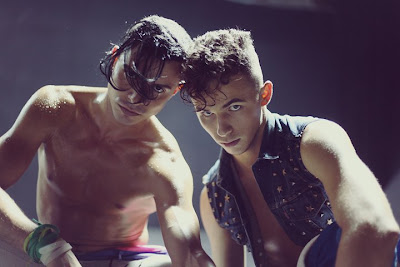 At this point, I can see myself in one of 2 fantasies scenarios resulting from being thrown me in the middle of these guys. Put us all in a room together with only a bed, condoms, lube, and water. Then:
1) let the dicks fall into whoever's hole above or below the waist is willing to take it in for a hot group sex session, OR my even more preferred scenario; 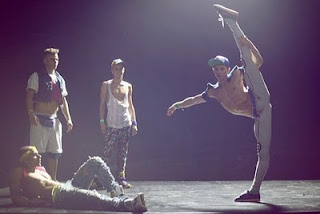 2) In my past tryst with dancers, I have had brief moments as a top with some of them. And that pose of that leg in the air does give me some ideas to take advantage of that flexibility. So how in this fantasy tryst would my being a top take place? 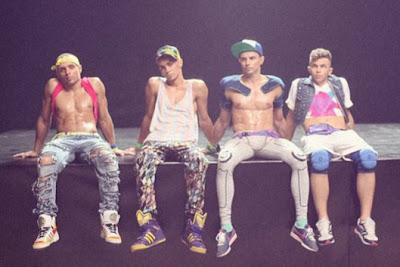 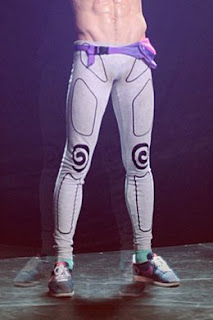 Also this gangbang would have me in a variety of positions. Mainly missionary to see those tight abs as they do their rhythmic thrust into me that they're obviously capable of and to grab those dancer asses. And also reverse cowboy. Because in addition to being an ass-man, I'm also a leg-man. And I would love to watch and massage those shapely dancer legs while riding their cocks. After all, they would deserve a massage after the thrusts those legs muscles could push into me when doing me missionary. So no matter what, with these 4 guys, I would be in for a loooooong night. And the previously mentioned water in the room, would be to replenish ourselves from the intense "workout".
I know some may take issue with these guys wearing stilettos. 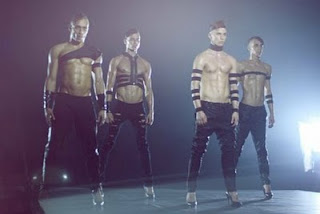 I personally don't care. Maybe it has something to do with the fact that heels or no-heels, I can still see some hot-bodied males to have a romp with. And that lust makes me yearn to see what they're going to come up with next.
Posted by LeNair Xavier at 2:06 PM

Email ThisBlogThis!Share to TwitterShare to FacebookShare to Pinterest
Labels: Dirty Fantasy, In Lust With