Earlier this year, I wrote a poem called, "The Industry". I appealed to people by way of this blog to suggest places for me to perform it at an open-mice night. I got comments, emails, and actual friends suggesting places, which I am thankful for.
However something happened to make me not take them up on those suggestions. During my time of considering those suggested spaces, I began writing more poems. Enough poems that it became a series. So I then didn't need an open-mic night as much as I need an actual presentation night.
With that in mind, after the successful Q & A appearance last year courtesy of Men of All Colors Together/NY, at a board meeting on November 12, I presented them with the idea of doing a poetry reading of "The Industry", now a series. After my proposal, I was more than thankful to get not only the OK, but also the date, January 7th.
So the press release reads as follows:
_________________________________________________________ 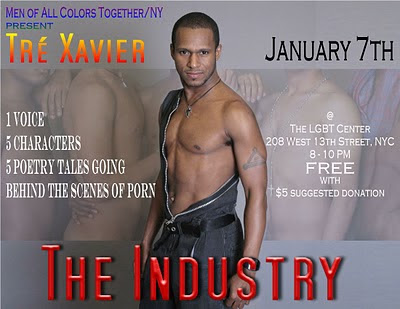 If you are living or vacation in or near New York City, I hope to see you there.
Posted by LeNair Xavier at 5:39 PM