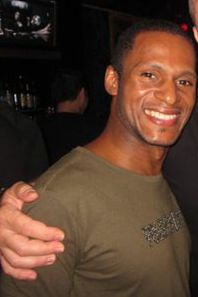 Last Wednesday, I made Will Clark's Porno Bingo my 1st stop for the evening. After that ended, I was considering going to the East Village and venturing to The Urge and The Cock, but since it was too early in the night, I needed to kill time. With that in mind, I went a few blocks east then north of Pieces Bar to Splash Bar to kill time at their Wednesday night party, Ocean. I ran into Danny, and we hung out for a bit. He was waiting for friends, and because of our past, I had no intention of putting myself in the mix of that. So I went off doing my own thing there. I actually found myself having so much fun that I was considering not going to the East Village at all, but I decided to anyway.

That came close to being a big mistake.

I went to The Urge, when they were in the middle of their weekly Ass Contest. I was watching it from the upper-level of the bar. Where I was standing, there was a railing and 2 steps about a yard or so to my right to get to that upper-level. Being that much inward and with my small frame, I knew I was in no one's way of coming and going up and down those 2 steps.

I was having fun. I saw an old acquaintance sitting in the corner of the bar behind me. I said 'Hello' to him, and went back to watching the contest from that same spot by the railing. Then the energy changed as this grey-haired White man in a black sports jackets came up those steps to my right. The next thing I knew, he placed his right hand to the right of my right hand, which means his body was now behind mine as if to close me in. Anyone with any sense of good manners and etiquette knows that this is invasive of one's personal space. Especially when we never made eye-contact before or during him being so close to me. So to avoid an explosion of rage over this intrusion, I did a slide to my left, and went to the corner of the bar with my old acquaintance. My acquaintance was eyewitness to the whole incident. We made faces at each other about it tried to laugh it off. Of course, I was trying to laugh off my being pissed about how I had to move my place to watch the contest because this fuck-headed desperado violated my personal space so.

After the contest, without having a single drink of alcohol, I went over 2 doors down to The Cock. Mind you, even though that is a spot notorious for pick-ups (as a recent blog entry showed), I go to the bar to be around sexual energy, as opposed to picking up a sex partner. To clarify, I go to a bar to observe people letting their sexual hang-ups go, and if you direct that energy at someone, then do it by first and foremost respecting the personal space of the object of your desire. If they are not interested, then you move on.

Evidently, not everyone has enough class to feel that way. For while I was at the bar in The Cock waiting to order a drink, I felt someone's energy behind me. Then that energy became combined with body contact against my back. Then more body, and more body. And I became fed up, because my sixth sense knew that I did not know this person...at least in a good way. I turned, and it was that grey-haired White guy from The Urge. I was already getting angry because I felt this was the 2nd person to invade my personal space in 1 night. But I became beyond fucking enraged to discover that this 2nd person was actually the same person from the 1st invasion of my space. Well, there are times when you just had enough. And this was one of those times. Not at full strength, but I pushed him off of me.

He replied, "Don't push me! I was just standing here."

I told him, "Don't look in my face, and lie! I felt you pushing your body on me. Now, back the fuck up!"

He then said, "I may be older than you, but I'm also smarter than you."

I looked at him and said, "Really?! I think you need to take your drunken desperate ass and get the fuck away from me! I am not the one tonight!"

He backed off, and no one in the bar seemed to really notice the exchange that just transpired. Then I went over to the bar, and ordered a drink. I got my drink, and moved away from the bar. As I stood there, I saw the creep walk out looking at me. I don't know if it was a look of disappointment in me or himself as he had to him walk out with his tail between his legs. But I could care less, as long as he was away from me. 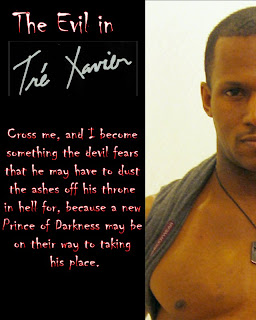 The possible logic that made him have the fuck-faced audacity to think he was smarter is what almost made my dark side from "Good Tré, Evil Tré" reach the surface....in the most heinous way possible. Because what made him think he was smarter than me? The fact that he was a White male in a sports jacket? If that was the case, then it was the stereotypical White American culture at play placing book-smarts over smarts about life.

And that's not a racist statement. How often do we hear White Americans (and minorities who crave to assimilate the stereotypical ways) say that a quality that makes them desirable is their being "educated", instead of being "overall intelligent", and that intelligence being more about book-smarts than smarts about life? The answer is : A great many.

I try to maintain a balance between book-smarts and smarts about life, with smarts about life taking presidence. Now, lets examine this guy claiming that he was smarter than me. If he was really smarter than me, like he claimed he was, then would he have been invasive of my personal space making himself open to endure the punishment I could have bestowed upon him for being that intrusive?

OR was I the smarter one, who in a split second saw the big picture and domino effect of what would have happened had I bestowed that a punishment on him beyond my verbal attack, which made me maintain my composure? And why did I need to maintain my composure? Because that punishment to him beyond verbal verbal would have been me grabbing him by the hair, slamming his head into the bar, and cracking his skull, maybe to the point of exposing that so-called brain in his head. However, the big picture and domino effect to follow would be me facing 25 to life (maybe even the death penalty), which includes jail time possibly being rape repeatedly by a big, burly cell-mate named Bubba.

So who had more to lose, and who took the high road, and practiced the proper restraint because of it, therefore showed themselves to be the smarter one? Me, ME, ME, MEEEEEE!


I know some sicko out there is reading this and thinking that I should be flattered that he wanted me so. And I would have been flattered, had my space not been invaded so by his initial approach at The Urge. Because what could have been flattering quickly became violating. With all thanks to him...another space invader.
Posted by LeNair Xavier at 12:05 AM