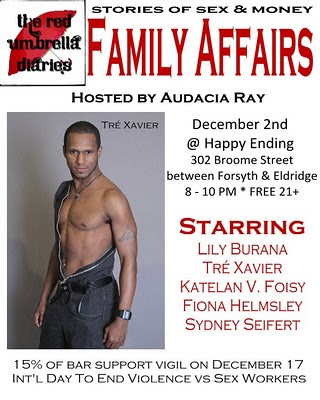 Last week, while visiting the Red Umbrella Project website's posting of the event, I came across 2 comments. Both of which spoke negatively of me without even knowing me. I tried to walk away from the matter considering how often I went to the website and never even saw the 1st of the comments until 2 weeks after it was posted, so I thought no one really cared. However, I then realized that (1)just because I missed seeing the comments so long after their posting, doesn't mean that others didn't, and (2)we live in a time where individual thinking is a rarity, so people may listen to these people spewing hatred and jealousy. So feel free to go to the link, and see the insightful and intellectual rebuttal that I've become known for.  Then come Thursday, I hope to see you at "Red Umbrella Diaries: Family Affairs".