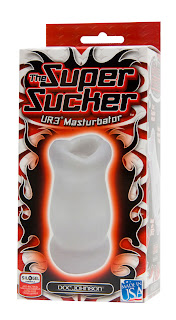 Anyway, the sex toy was Doc Johnson's Super Sucker. The texture of it feels like a Fleshjack minus the plastic case, and the opening of it is shaped like an open mouth (with even an indentation at the top of what's to be the upper lip)....ready to be of service. As soon as I saw it, an inner-voice told me that I was going to make a video of myself using it. After the initial shock at the instructions by my inner-voice, I asked myself "why?", then realized that sites like XTube, and solo scenes from porn company websites are overloaded with videos (like mine) of guys using Fleshjacks. Also, by the Super Sucker being about half the length of a Fleshjack, and having an open back end, I can play with that for your viewing pleasure. Because I know some of you would love to see what a cock looks like sliding in and out of a willing sucker's throat.