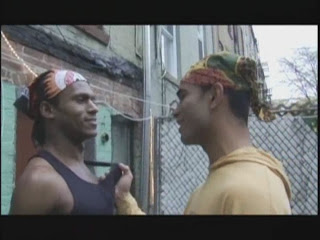 Looking back, the only time I can truly say that I was not a prostitute for a movie was my next to last movie, "All Out Assault". I'm not going to re-tell the story, but I will say, it was void of being prostitution because BOTH me and my scene partner, Taino wanted each other before that on-camera pairing. Thanks to director Ben Marksman for reading my blog, our doing a scene together simply gave us a chance for our getting it on to come to fruition. It was why we couldn't stop grinning at each other while delivering our pre-sex dialogue.


I would like to add my work with Forbidden Funk Media as another time I was not a prostitute, but I can't. You see, although a blog entry posted beforehand about my scene partner, Foxx may have led to our being paired together, I later discovered that they had a policy of not giving models prior notice of who they are being paired with. This is part of why a distance had grown between us, at least on my end. After this discovery, I felt as if I was dealing with the scum of Big City Video in that incident I mentioned in Part 2 of my last vlog.

The dialogue was as follows, starting with me tweeting: 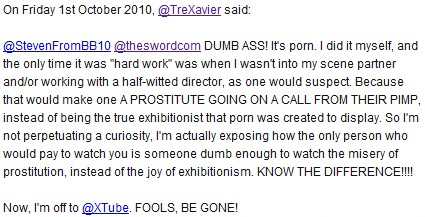 After a few drinks and a hit of whatever chemical later, he decides to add this:

THE NEXT DAY, The Sword decides to retweet adding an "Amen". With such lateness after I moved on from the matter, I replied: