My Deeper Detail of Older/Younger

This past Friday evening, I attended a discussion held by Men of All Colors Together (MACT/NY) at the LGBT Center here in New York City. The topic of the discussion was "Relationships Between Older Men & Younger Men". I decided to attend because I have a very strong feeling about this, and what type of person, especially the younger person seeks out this type of relationship. And I found myself quite enlightened on some levels, but mostly, I left holding my original position.

For me personally, even in my days of considering living life as a heterosexual male, my rule was always "If you're old enough to have me, it's not happening", and vice versa. That would put my age limit somewhere around 13 years younger or older. So right now, with me being 39, that would put my age limit for dating a younger person near 26, and someone older than me near 52.

I recently broke that rule by briefly dating someone 24 years old as told in the blog entry, "Goal Chaser's Void & My Wasted Time". If you have read that post, you can see that the reason it ended could have happened with someone of any age. But one question that always rings in my mind is: why is it that after I told them my age, did they still want me? Well, I may have found the answer.

I believe that for some, it has to do with the fact that I don't necessarily look my age to most people. So a younger person who usually dates someone their own age doesn't care because I appear to be close to their age.

In other cases however, the history of most guys that I have been involved with who are at least 10 years younger than me, have a history of dating guys usually with an age difference beyond my aforementioned limitations. That already sounds an alarm for me, because to me that says that this person is in search of a "father figure". I used to like the George Michael song by that title, but the more I thought of this subject matter in recent years, the less appealing that song has become. And as it turns out, that's usually how our relationship goes...me being more like a father by mentoring them, instead of being a boyfriend. The fact that in this and the aforementioned scenario, them seeming to tolerate my mentoring role is what raises the volume of the alarm. That is why I'm always the one who ends things. And I usually part ways with these type of guys completely when the dating is over, because these guys have issues that it's not my place to deal with. They need to come to terms with them on their own, as a question posed to me after I told my history at the MACT/NY discussion points out.

At the MACT/NY discussion, one person asked could it be simply that one person has a stronger personality? In answering that question, (ignoring my personal experiences) all of my observations I've seen of such relationships the stronger personality is in the older participant, which implies a father/son dynamic, instead of a romantic partner dynamic. To be honest, while I maintained my calm, I was actually quite annoyed by that question, because that seemed to be giving an excuse to say this type of relationship of being mentor is OK. And it is...when you are NOT calling yourselves romantically and/or sexually involved. Otherwise, it's a problem. For younger guys seeking out these kind of relationships are way too often males with "father issues", and older guys seeking it out are looking to regain their youth. Therefore, both participants have issues that they need to deal with, because those issues make the relationship doomed for failure. Hence, why I ended all of mine going in that direction, because my motto is "I'm not going to pick up where your parents fucked up." 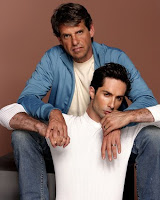 Besides the dynamic I already mentioned suspecting to be at play in an older/younger relationship, I also suspect that the younger person is a "kept" person. Even if they amass their own wealth later on, they either start out as escorts, or are guys who live with an escort's mindset. You may even know of a few because they have been or are presently known porn actors.
The part of the discussion where I found myself enlightened was when most of the older guys mentioned how because of the breakout of the AIDS epidemic in the 80's, that they find it hard to find guys their own age. In this case, I find going for younger guys for a romantic relationship is understandable. But again, there's a limit one must put on themselves as to how far their junior or senior they will go. And figure out what in that person will make them break that rule, should they choose to do so.
Now those of you who have followed this blog long enough know that I don't do analysis like these without putting an analysis of myself on display.

With that being said, in my case, the reason why I allowed anything to begin with the younger person is because I'm a high energy person, who after all my years of living as a hermit before my coming out, I like to be social, and I LOVE to dance. With all that in mind, I need someone who will keep up with that high energy, and desire to be in social settings. Usually, the younger guy has that desire, BUT they are lacking in the intellectual prowess needed to keep me content. Now, the problem with most guys that I've dated my own age is that they don't have that high energy and social drive, so I end things because I know that they will quickly bore me, and make me seek that fulfillment elsewhere. Also, guys I come in contact with who are my age have led (and often still do lead) lives that have so worn down their appearance that paired with me, we will look like a older/younger relationship already. It's the fact that they often still lead those body deteriorating lives that makes the relationship a no-go. And please keep in mind that the body deteriorating lives they lead is not always drug and partying-related. It's actually more often job-related. Either way, it's unattractive to me to see a male allow himself to be worn down by anything other than Father Time.

Now, what I have said here may bother some of you, because it means that the only kind of relationship we can ever have should we meet would be in your fantasies. And I am actually quite proud to say that. Because I grew up in a household without a father in the home, and I have come to terms with it enough that I am not seeking a replacement for that missing father, NOR do I care to play that role for someone else. I need to call someone "my partner" with the mental, physical, spiritual, and emotional capacity to take on the powerhouse I am in all those characteristics. You can't be guiding me like a father to a child with it, and I can't be guiding you like you are my child. The only way it will work with me is for us to guide each other in a partnership fashion of lover-to-lover. For a romantic relationship, parenting fashion is not allowed here.
Posted by LeNair Xavier at 6:28 PM