Joke In Your Place...Or Else

Now, my faithful readers know that I do have a sense of humor, especially about myself. However, these tweets were not amusing to me, nor did they make me angry. Then again, they did. They made me angry because they annoyed me. They annoyed me because I am someone who is very much about everyone being in their place, and act accordingly to being in that place. With that said, this could be a laughable joke from a friend. However, this is not a laughable joke from a repeatedly racially insensitive like Zachary Sire of TheSword.com that I have repeatedly locked horns with because of that racial insensitivity, or from GayPornBlog.com whose lily-white website has never made mention of me, OR (even worst than Zachary Sire) has never had any interaction with me.

Within my anger, there was a great deal of solace. I took great solace in the fact that the reason for such a reaction from them is because I hit them with the truth so much that they hate me for it. Actually, any one in the mental health profession can tell you, that with such truths that I've told, the reality is that while they display it as hatred towards me, it is actually hatred they have towards themselves for their behavior. And that's fine, because it shows how the TRUTH IS CONTAGIOUS. I'm sure neither Zachary Sire or GayPornBlog expected to show their true selves (meaning their true lack of character) by their responses, but any position-respecting individual now sees the lacking that I have seen all along.

Now, I wasn't going to let this go by without saying a little something to vent my annoyance of these human gnats. That's why I wrote in reply via Twitter: 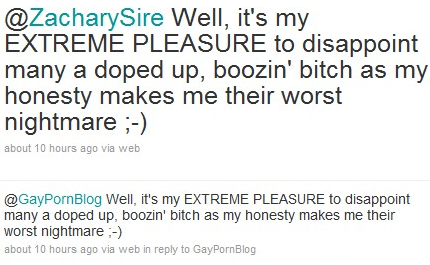 Now what exactly do I mean by "doped up,  boozin' bitch"? Well, that starts with a good analysis of Zachary Sire's profile pic from Twitter. 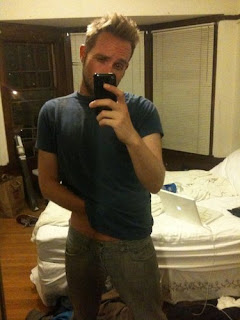 (1)Take a good look at those eyes. Are those the eyes of someone sober? Of course not. And the only one who would dispute that is someone who is just as fucked-up as he is. He's probably so twisted that if he tried Visine to hide it, the alcohol and/or drug-drenched cells in his system would suck up the Visine thinking it's just another chemical for "the party". SLURP!...Visine, GONE!
(2)If you're going to take a picture that is going to be seen by the internet public...CLEAN YOUR FUCKIN' ROOM!!!! Or at least have enough class to crop the picture. You would think someone working for a web-based rag would know such rules of internet photo etiquette. Because people who don't like you, can easily get such pictures and show you for being the unkempt pig you are for taking the picture....Oh my, is that what I'm doing right now? HeHe ;-)
Now, I don't need a picture for analysis of whoever at GayPornBlog was responsible for that tweet to remind you of age-old sayings like, "Bird of a feather flock together", OR "You are known for the company that you keep". Enough said there.
Chase Coxxx and myself have recently started following each other and communicating via Twitter. When I saw that reply and retweet, I sent Chase a tweet asking if he had seen them. I'm the type of person that when I talk about you, I don't care if you know, so I make it obvious by tagging you in my tweet. Just ask Jeremy Bilding, as I tweeted about my disdain for his being "gay-for-pay", which inspired my latest Formspring question. And I tweeted the same way about Zachary Sire and Gay Porn Blog in my tweet to Chase. The reply I got from Zachary was this:

Now, I'm not going to play the "Gotcha" game with Zachary Sire that he insist on playing with Victor Hoff of MOC Blog recently. I'm just wondering...what exactly does "bb" stand for?
That question doesn't say, "Gotcha". But with Zachary Sire's track record of displays of racial insensitivity, and TheSword.com's minute coverage of Black models, if "bb" doesn't stand for what my (and many other people of color and racially sensitive Whites) initial thoughts say, then Zachary should take that as a reminder that acronyms with certain people are not a wise move.
In short, be sober so you'll be mindful. Good day.
Posted by LeNair Xavier at 7:55 AM