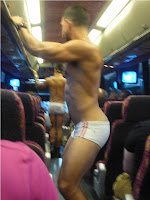 As the title suggest, I have never been to Six Flags Great Adventure before. So when Fairgrounds 7 held at Six Flags Great Adventure was announced, I was hoping to find someone to be a tour guide to me.  Hence the Facebook and Twitter updates I was posting about my going, as well as my inviting someone to be my "plus 1" as I was selected to be on the Gaydar.net bus to get there.
When I got there, I was hoping to find someone that I knew and would want to hang with, but to no avail I did not. After realizing that I lost more than an hour trying to do so, I did what I've done in all of my discovery adventures....I went it alone, and glad to have done so. 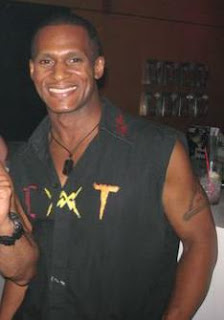 I was wearing my self-designed "The L XTreme" shirt that is seen in this picture. I thought it fitting because I knew that I was taking on something new. And while this may bore my most loyal readers to rehash all this, whenever I take on something new, an extreme situation always results. Plus my legal first name starts with "L", hence the name "L XTreme". For example, I lost my virginity in a 5-man orgy. I think that says it all about how extremities in initiations and I go hand in hand.
I didn't go on many things, but what I tackled first was major for me. I got on The Twister. While some were talking about the Kingda Ka being such a high roller coaster, having my 1st ride there be one that takes me any degree of high off the ground AND turns me upside down while up in the air falls into the category of another extreme initiation for me. Especially because I have a fear of heights that is sparked by not having support around me. Sure you're in a harness, but (1)you're not stationary, and (2)there was no one in the seat to my right. It would have been to my left, because when I first sat down, that's where the empty seat was. But the young lady sitting next to that empty seat made her nervousness about not being surrounded known. Even though there was also a young lady on my right, she didn't make the need for my presence known, so trying to be a noble gentleman, I moved over to fill the seat to my left, which left me in the same position as she was in originally, with no one surrounding me. But I dealt with it, and faced my fear.
I will admit, for someone with such a fear of heights, I kept my eyes open for a good deal of that ride. This coming from someone who would stand on the 11th floor balcony of the law firm is used to work at, look down at the ground, and start feeling like the ground was doing a slow spin.
Next, was the Parchute Training Center where they take you 25-stories high up in a seat, and let you slowly drop down. I was originally going to go it alone as well, but it turns out I didn't have to. A kind gentleman who introduced himself to me on the bus went with me. This came about because there were 2 guys between me and this gentlemen and his friend, and each seat sat 2. The gentleman and his friend got in one seat, and the 2 guys in between us got in another. For some odd reason, it turned out being that the gentleman and his friend together were too heavy, which we all found weird since neither one of them were at all fat. So me and the gentleman went up together. It was fun to look at the park, and see all the lights from so high up. Many thanks to that gentleman for going up with me, as I did warn him of my fear of heights.
Was I over my fear of heights yet? The next ride might give me (and you) a better idea as to whether or not I am. 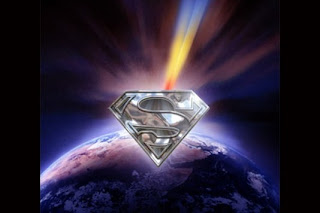 My next and last ride was Superman: Ultimate Flight. Anyone who knows me knows that I'm a Superman fan. I'm not a comic book buff, but I am a Superman fan. In fact, I have a Superman eyeglass case, a Superman light switch cover in my room, a Superman decal for my laptop made by Skinit.com, and there's more. So if that isn't proof enough, I don't know what is.

On my 1st attempt, the line to get on the ride was long, which is why I took so long to get on it. When I realized that my wait wasn't going to be the 1 hour that some were warning in my previous attempts, but instead less than 30 minutes, I gave it a go.

My fear of heights was still very much alive. I didn't realize until I got there what the draw to this ride was. It's not just another roller coaster. And you're not in a hanging seat as I originally thought. The seat comes up to turn you horizontally....as if you were Superman flying. I thought to myself since I was a kid about how I always wanted to fly like Superman, but if I could, my fear of heights would get in the way. So what good would I be to the world if I had super powers. Well, if I got through this ride with my eyes wide open, my question would be answered.

The ride began, and at first there was a floor beneath you. And then it happened....there was no longer a floor beneath you. You are now up in the air with only the ground below. And then you're let loose full speed ahead. I felt an urge come over me that I didn't expect. The self-control freak that I am allowed myself to lose control...and I hollered, "WHOOOOOO!!!!". I did it repeatedly. So many times that my voice was on the verge of getting raspy. I can't recall, but I think I kept my eyes open for the overwhelming majority of the ride.

After the ride ended, I realized that not only can I not recall as to whether or not I kept my eyes open, but I know for a fact that I never tried the Superman move of putting my arms straight forward. For that reason, and that reason alone, I told myself to go again. And so I did, and this time I got it right. My arms were pointing forward, AND I made sure to keep my eyes open. So yes, I saw EVERYTHING. Every twist and every turn. I saw it all.

I hadn't been to an amusement park since I was a child in elementary school. Which might explain my extreme intolerance towards childish behavior. I grew up with so much harsh reality, but never given the social escape that children need. I only had my imagination that I played with in solitude. So like I did with my sexual virginity, my losing my Six Flags Great Adventure virginity that day was me making up for lost time. Also, as I mentioned harsh reality, part of the draw to make this day fun was more so because it was another part of my celebrating my 1 year after retiring from porn.

After that second go on Superman: The Ultimate Flight, I ran to make sure I got on the bus going home. I was like a kid. I got on that bus, stretched out on the seats like a kid in the backseat of his parents' car, and went to sleep. Once I got home, I continued my sleep where I left off on the bus. It was a fun day.

Now in closing, let me shed some light on the 1st picture of this post. There were go-go boys on the Gaydar.net bus. So all of you who saw my tweets and Facebook updates inviting you to be my "plus 1", and chose to be asswipes by ignoring me...wipe the egg off your face with this tease of what you missed out on.
Yes, I was on the fun bus, bitches. That's what your asses get for not replying.
Maybe next year....
Posted by LeNair Xavier at 8:59 AM