A few of weeks ago, I had a tryst with a Brazilian that was a long time coming. We met at the bar, The Cock in NYC. We would make out heavily, then part ways. I knew I wasn't inviting him back to my place, mainly because of the long train ride to get there. The other reason was because after cleaning up, by the time I would run into him again, my room went back to looking like a tornado ripped through it. So with him so often the aggressor, I left him to make a suggestion. However, none was ever made. One night, we even went as far as riding the train together. And when his stop turned out being before mine, I thought this might be the night....Yet, there was no invitation to accompany him. These run-ins of making out to only lead to kisses "goodbye" at the end of the night went on for probably over a year. 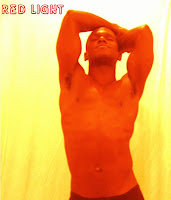 ...This time, the event IS the story.


Red Light powered by XTube
Posted by LeNair Xavier at 11:55 AM