With the weekend upon us, and knowing that I may be seeing quite a few go-go boys this weekend as we usually do in gay nightlife, I thought I'd point out a little something for you to think about. 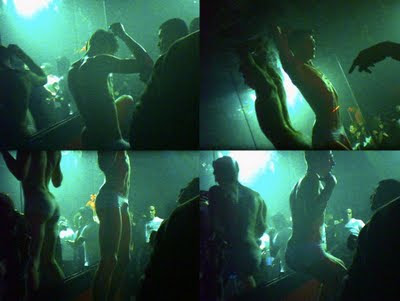 Like many men who indulge in NYC gay nightlife, I enjoy the sight of go-go boys. But there are some questions you should ask yourself as to whether or not you are dealing with a "quality go-go boy", therefore find him worthy of you tip. In no particular order of importance:

1) Are all the go-go boys the same ethnicity, race, body type, or close to the same complexion? 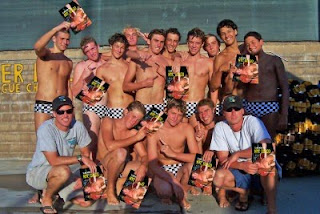 Any go-go boy worth a damn in NYC is going to want to embrace the diversity, even in the workplace of a bar. If a go-go boy is willing to work for someone so short-sighted that every go-go boy (and the crowd) is the same ethnicity, race, or same (or close to the same) complexion as himself, then he's not worth your money.

2) Does he have a problem with you taking his picture? 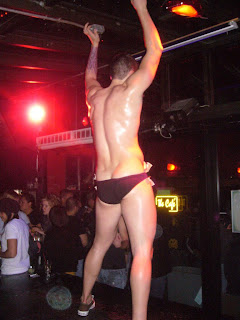 I know that we live in hard financial times, but my intellectual tip for sex workers (from go-go boys to porn actors to escorts) has always been that if you need to hide evidence of what you're doing, then you shouldn't be doing it. Make way for those who are brave enough to not cater to America's uptight attitude over sexuality and the male penis. Find another legitimate way to make your money. So if you see that having his picture is an issue for him, then keep your money in your pocket. I've seen enough go-go boys have that problem that even though I initially may want to take a picture, I don't even bother asking. I've tipped some go-go boys, and when I see someone else take a picture and the go-go boy has a fit, from that point on, that go-go boy is cut off from getting any kind of monetary tip from me. They'd better take the aforementioned intellectual tip I gave instead, and be on their way. And YES, I do break the stereotype, because I am a Black man that gives monetary tips. Which brings me to my 3rd question of a go-go boy's quality.

3) Has he brought into ethnic stereotypes?
I have been to places like The Urge, The Cock, and Macho Mondays@Nowhere and seen go-go boys so racist that they pass me by when I have a tip in my hand ready to give them. All because they've bought into the racist thinking that Black guys don't tip. Now, if you're not Black yourself and see a go-go boy pull such a stunt, you should be ashamed of yourself if you dare tip him.

Well, some of us actually do tip, but there's a totally  legitimate reason why many Blacks don't. Maybe it has something to do with how bar/clubs don't hire the same variety in body types in Blacks as that they hire in lighter complexions. Most bar/clubs and party promoters, instead make ALL of their Black hires buffed-up gym-rats. I'll need more than 2 hands to count how many bars, clubs and party promoters pull this one. And once again, in a city as diverse as NYC, the gay males who hold these positions should be ashamed of themselves. 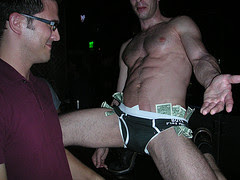 I've seen many White go-go boys show their preference for other White guys by holding elongated conversations when being tipped only $1, and when even an attractive non-White comes along, they just take the dollar and say, "Thanks" and move on. And some don't even say "thanks", instead they'll take your money, grin, and then move on. Now I'm not only criticizing Whites who make their desire to touch only other White skin obvious. I'm also getting on Whites who prefer non-Whites, and Blacks who prefer non-Blacks. These are the people who give the profession of being a go-go boy a bad name. And bar,clubs, and promoters who turn a blind eye to their dancers behaving this way don't show themselves too on the ball about how their staff is treating their patrons.

So while you're taking in the sights of some go-go boys you think are hot, take note of those behavior patterns. For what you think is initially hot, due to their mindset, you may find them to be quite ugly in the end. Therefore, deserving of you keeping your tip money in your pocket. Take heed, because I plan on going to a couple of parties this weekend, and plan on practicing what I preach. So I'm not expecting to do much tipping. If I do, I will be pleasantly surprised. And I do like some surprises, so let's see what's in store. I'll report my findings on Twitter on Monday.

Lastly, I'm not trying to be a downer on your weekend outings, but it is your money. I'm just trying to make sure that you spend it on quality performers.
Posted by LeNair Xavier at 11:28 AM