An ABM Take On FIBO? Or The TRUTH?

I was recently asked by the author of "The Blackout Blog" via Twitter:
"what's your angry-black-man take on FIBO (Fire Island Black Out)?"

I will get to answering that question. But first, I had to make one thing very clear by replying:
"I'm not an angry-black-man, I'm just REAL when few others will be."

And it is true. History shows that many want to call you "angry" when you refuse to sweep bullshit under the rug and deal with the real, instead of pretending every is fine and wear a fake smile. What few tend to realize is that sweeping so much under the rug is why there are so many alcoholics and drug addicts all over the world in the first place. Especially among men and women of the LGBT community trying to escape the pain of being disowned by "once-thought-to-be" family and friends.

With that in mind,  why do you think the bars/clubs with mostly White American clientèle often has the percentage of Blacks getting drunk off their asses higher than the percentage of Whites getting drunk? It's because these Blacks are trying to numb themselves to the reality of the racism around them. OR why do dark-skinned Black males tend to be so aggressive when they've caught the attention of a non-Black who tickles their fancy? Well, while only non-Blacks with low self-esteem find such behavior appealing, the reason for such behavior is because after the rejection from all the racists prior, these Blacks are holding on to this lighter-complexioned person for dear life as a sign that they are the desirable sexual being that too many gay media outlets have over the years refused to show them to be. There are porn scenes that show this over-aggression.

Now, of all who have read of my behavior in a bar/club, or have at some point bared witness to my behavior in a bar/club....why haven't I shown myself to be either of those types of Black men? I don't behave that way whether the crowd is mostly White like in The Cock on any given night, or at Splash Bar with its only night of being predominately Black and Latino because of the Wednesday night party I frequent called, Ocean. It is because, I see the reality around me, and instead of trying to numb myself to it, or overcompensating for it, I take note of it. And having that knowledge, daunting as it may be at times, at the end of the day it gives me a peace within myself that makes me approachable and often leads to the adventures I tell of here.

After I made it clear that I was not an angry Black man, but instead, a realist. The response I was given in return was:
"Are you kidding?! That little muscular body is PULSING with RAGE! ;-P"

Well actually, my body is always pulsing with something....a high sex drive. But rage however doesn't come unless provoked by deny reality. Hence my response:
"Not originally. It starts out as truth, but becomes rage when people show how in the denial they are of that truth."

This is also a truth that I can easily prove. Not to The Blackout Blog Man (who was teasing), but to those who are so easy to believe that I am an "angry Black man". For a good example, had the guy who became the subject of the blog entry, "Dumb Sell-Out Mo-Fo" opened his eyes to the truth of the racism around him, I would not have been justified in letting that blog entry see the light of day. I tried to approach him at first as being misinformed, but the more in denial he showed himself to be of the obvious truth, the more enraged I became. And denial when I am doing my damnedest to enlighten you on your misinformation is not a good mix. It probably stems from my anger towards myself for denying my orientation for almost 2 decades, maybe more.

Now, to alas answer the question about my take on Fire Island Black Out, my reply:
"The realism is: if the separatism with the LGBT community didn't spread all the way to FI(Fire Island), there would be no need for FIBO."

Must I really go into detail as to how I'm right about this one? I will say this much....he did not dispute it. In fact, that is when our tweets of banter about me being an angry black man brought forth the aforementioned "tweeted" responses.

The fact is non-Whites are too often made to feel  that they are a trivial existence in gay celebrations and the community overall. Whether it be getting good health services, celebrating our sexuality via exhibitionism, overcoming the oppression of powers that want us to be ashamed of our orientation through Pride celebrations, or simply vacationing in a LGBT vacation spot, there would be no need for Men of All Colors Together NY, Black Gay Pride, Fire Island Black Out, GMAD (Gay Men of African Descent), Bisexuality Day (September 23rd), The Bisexual Pride Flag, JRL's Asian, Black, and Latin charts, or any of these separations if every part of what makes up the LGBT community was shown the same amount of respect for simply being a part of what makes up the LGBT community. 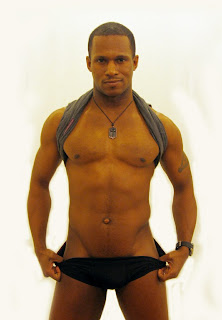 So this is not the ranting of an ABM or "Angry Black Man". These are the words of a person who sees the truth that I don't have to be a Black man to see. I just have to be humane enough to see it, and man enough to acknowledge it. And I am not going to become angry, until someone shows themselves in denial enough to try disputing any of what I've pointed out here.

Before I sign off, I beg of you, do not hide from these truth by attempted escapes through drugs, alcohol, and displays of over-aggression. See them with your eyes wide open, and you will be a better person for it in the end.
Posted by LeNair Xavier at 8:50 AM