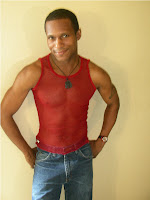 Back in 2008, my friend Neal started showing me his interest in photography. I allowed myself to be one of his subject. They were great poses, and some good pics, but some were not as great as I had hoped because some of them (my favorite pics in fact) had a blur to them. You may have seen this for yourself as I have over time used those pics as profile pics on MySpace and Facebook, so you may be able to confirm that what I'm saying is true. But an even better way is to go see the collection via my Flickr page.
Neal has for some time been trying to get me to go on one of his photo session trips out to Sandy Hook's nude beach, and due to my memory of those last pics, I didn't accept the invite until I had some way to see that he improved. So a few months ago,  while I was updating my pictures on my profile on Model Mayhem, I looked at his photos on the same site. I was impressed by his improvement. 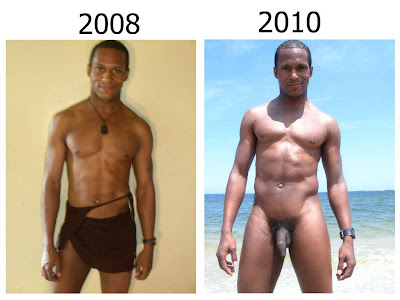 The pictures didn't look like they were taken by the same photographer at all. After seeing this, I decided that should the opportunity present itself again to go on one of these trips that I would go, because with every new thing we try, we sometime screw up before getting it right. And I'm no exception.
For instance, my YouTube video "Dance To The LXTreme" was originally a 15-minute long VHS video. Now, did I really believe some casting agent was going to sit there and watch a 15-minute video of me - an unknown, dancing? No, especially when I wasn't totally content with my own needed rush job choreography. Hence the flashy closing credits to overcompensate. Plus, I didn't have the means to edit it down to the size that it is now. So I, like Neal had to learn as I grew.
As luck would have it, a couple of weeks ago, Neal posted a Facebook update announcing that he was going out to Sandy Hook again, this time with Brayden James. I decided that it was time to go for some pics with a new setting, so I threw my name in the hat. We made our plans, and off we went. 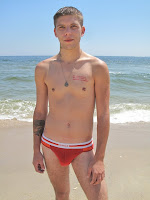 Before going anywhere, I wanted to know who I was going with, so when I saw the name Brayden James, I had no idea who he was, so I looked up his Facebook profile, and found out that we share a birthday - March 31st. I also discovered that he is a porn actor - for one of the studios that I remain most negatively critical of in their casting practices, Falcon. So I made a mental note to keep my feelings about Falcon to myself and avoid the topic, because I knew that should we disagree on the matter, 2 same-day born Aries butting heads would have made for a tension-filled day. And I was looking for fun in the sun. 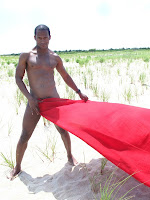 And I did get plenty of fun in the sun. There were some hot bods to check out, as well as some that make you wonder, "What in the h-h-hell were you thinking getting naked for others to see?!". Also, I had an idea to use a red blanket as a prop for my shoot, and the wind just happened to come by and help me out.
Of the other good I saw, I saw one past scene partner, the nudist that I mentioned in my post about Folsom Street East, and one of the 1st faces I saw when I hit the beach was a blond I've seen at a few sex parties. It was one of those attractions where you never talk, instead you just make out. We have yet to fuck, but I think in due time. Because while Brayden (who got his pictures taken first) was doing his shoot, the guy came over to me. He introduced himself, I heard an accent, and I discovered that he was German. And it has long been rumored that many Germans - male and female, love the chocolate.
Me and Brayden both had audiences during our shoots. Before my shoot, we went over to some guys who were checking out Brayden during his shoot. They were all White, but only one of them decided to acknowledge my existence by asking my name and where I was from. When we came back to that area by the water for part of my shoot, I later discovered that he was either the more obvious one of them with color-blind taste, or more forthcoming with it. Because he was sitting up watching my shoot then suddenly had to cover his crotch with a towel. What puzzles me is the fact that while this one guy was getting aroused, ALL OF THEM were watching me during my shoot as well. Some may think that I'm looking too much into this, but when you are the thinker that you should be, you can't help but try to understand the behavior that motivated most of them to ignore me one minute, then be unable to take their eyes off me the next. It's the human mind at it's fascinating and complex best.
It was a fun day overall. Great conversations, and as you will see from this slideshow great pics.

The inspiration to use "Runaway" by Janet Jackson as background music hit me in true artist form, by being the 1st thing that came to mind the other morning when I was envisioning this slideshow. I just heard the music in my head, and decided it was perfect. Also having the connection to music that I have, I don't think it's too hard to understand why I chose "Runaway" by Janet Jackson as background music for the slideshow. It's because my trip to Sandy Hook was time for me to "runaway" from crazy world that is NYC for a day, and even though I saw a great many faces that I see in NYC, I LOVED every bit of that escape....and what came of it.
Posted by LeNair Xavier at 5:05 PM