I had quite a busy weekend with all the volunteering to get entry into some places. Friday was the start by me volunteering to help set up for Broadway Bares XX. Saturday was a day of fun and sun as I lost my nude beach virginity by going out to Sandy Hook for a photoshoot, with my friend Neal as the photographer (more on that in a future post). But Sunday was the craziest of those days, as I woke up early to volunteer to help set up for Folsom Street East, attended the events, THEN went back home to the Bronx, and got changed to come back to Manhattan so I could use my ticket for Braodway Bares XX: Strip-opoly. 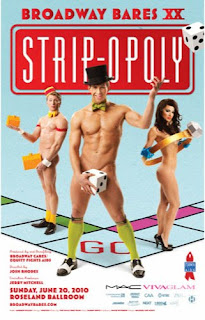 Needless to say, it was a skin-filled weekend. I'll start backwards with Broadway Bares XX: Strip-opoly, because while I had a great time, I can say as much as I would like to. For I couldn't see but so much between my height and some guy who wasn't much taller than me BUT had his hair with a gelled peak blocking my view. So with a star-studded guest list with the likes of Vanessa Williams, Kristin Chenoweth, Lucy Liu, and others I couldn't do much in regards to pics this year like I did last year. Especially because trying to get around that guy's gelled peak was making me miss the show, and obstructs others' view like mine was obstructed. So enjoy what I tried my best to bring you. 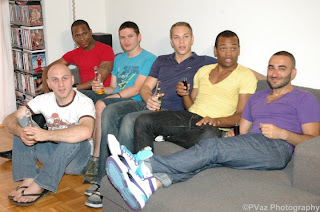 Now if the hot naked blond from that slideshow looks at all familiar to my loyal readers, it's because you've seen him here in another slideshow not too long ago. He was one of the leads in the gay soap opera that I was recently a featured extra in called, "16th & 8th". He's the one sitting in the middle on the couch in this pic.


The reason I backtracked is because the most scandalous stuff came from Folsom Street East. And it's no secret how you all love scandal. After all, isn't that why you're here?

After arriving at Folsom Street East, my initial plan was to change at the volunteers table into my little black and brown leatherette thong, but I saw so few people dressed in fetish gear. And of those in fetish gear, few were pushing the envelope even at the booths. Then I decided 2 things: (1) if I don't see them yet, someone here is pushing the envelope the way I want to with my planned outfit, and (2) as much as I hate to harp on this fact, few Black guys ever try pushing that envelope, so someone needs to have enough balls to represent. With those 2 things in mind, I went to the volunteer table and changed. And I emerged with a load of eyes on me. For which I am by no means complaining.
One of my 1st stops was seeing demos by the NY Bondage Club. Now, let me inform you that bondage is not my thing. I like my hands free to grope my sex partner, and being refused that is very, VERY, VERY, VERY seldom a turn-on. However, while bondage itself is not my cup of tea, one guy getting tied up by a big daddy was someone who I wouldn't mind having a long hard flip-fucking session with, especially with that nice bouncy ass of his. I'm sure it would be a pleasure to fuck and grope while being fucked. And the muscular Bondage Master (or whatever his title is) could fucked my ass so long and hard that I would have to do Kegels alot more than I already do in oder to get myself back to my tight self. In fact, I found myself so infatuated that I even fantasized about him having bound while he pounds - away at my hungry hole.
I also met a nudist. He recognized me from my outing on Saturday to Sandy Hook's nude beach. He was sitting across from me and my friends that day. He was sporting a pretty nice hard-on. One that if it wasn't for beach rules, I would have went into my bag, grabbed a condom and lube and had a seat there instead of on the beach blanket with my friends, and rode his dick like I was on a bucking bronco. We chatted for a bit, exchanged taking pics of each other and emails. And I signed up to be on the email list of the nudist group he's a part of.
I also ran into quite a few past tricks. No surprise there. Including one from the Olympus party that I sometime help out at. I don't know if he recognized me from there, but I did recognize one defining mark on him - his tattoo of a Chinese symbol on the back of his right shoulder. Whether he recognized me or not, he was still smitten with me. At one point, I was walking into a crowd where you could hardly move. He was behind me, and as he took full advantage, I let him. He felt up my ass, took my hand and directed it to his crotch, and pulled my head back to kiss me. Never exchanging names. It was obvious that if he could have, he would have fucked my ass until he was sweating buckets just like he did at the sex party that night.
The event of the day many looked forward to was the pie-eating contest where they smack a cream pie on a guy's ass and his partner has to lick him clean, with the team to make lick their way to a pie-free as first is the winner. With all the nice asses on that stage, I found myself a bit jealous. Then again, it wouldn't be much fun to have to rush eating out any of those nice asses, including that of co-host Mike Dreyden. Well, you'll see why as you watch this slideshow that includes all that I've talked about here, and then some, such as slides of performances by Fredrick Ford, the Imperial Court of New York, and Peppermint. And opens with a run-in with D. Kareem, author of The Blackout Blog.

The finale performance of the day was from Sylvia Tosun. Here's the video I recorded of her finale.


With so much booty to view and fantasize about this past weekend, you know I needed all day Monday to recuperate. And looking at these pics for this blog post just brought that exhaustion right back. I hope you enjoyed it.
Posted by LeNair Xavier at 10:55 PM