Playing With Squirts of Wet® SYNERGY™

According to Wikipedia, synergy is defined to be where different entities cooperate advantageously for a final outcome. Well, recently I was allowed to give the new lube from Wet® called SYNERGY™ a try. And from the tale I have to tell you, there was a lot of synergy going on in the room. 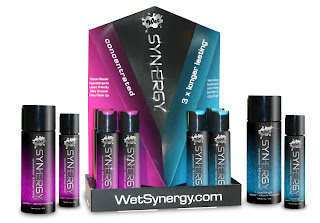 I tried the Cool Tingle version first. I put it on both mine and Tom D.'s cock, who like I is uncut. We both agreed that the Cool Tingle doesn't work well on the sensitivity of an uncut cock's head. Now, how well it works on someone who is cut, is something I need another sexy human guinea pig to find out. Before coming to that conclusion though, I put in on my ass when I was preparing myself for Tom D. to top me. When he pounded my ass or I rode his dick like a bucking bronco, the wind from our thrusts added to the cool tingle sensation on my hole. So for now, I would have to conclude that the Cool Tingle variety of Wet® SYNERGY™ would best be received by gay bottoms and women.

For our next go-around, we tried the regular SYNERGY™. That one had us fucking like rabbits. I would stroke his cock, then straddle him. Then he'd get so fired up, he'd fuck me in every position possible by putting me either on all fours, on my side, or on my back. The great thing about sucking his cock with the lube on was that the lube is totally tasteless. And it must have felt great on his cock, because Tom D. has never fucked me like that before. I guess it's a good thing that when I bottom, I'm a bit of a power-bottom. Both versions of the lube helped me to uphold my reputation.
You may have read of my sexcapades with Tom D. before. Before Wet® SYNERGY™, there has always been one synergy working between me and Tom D. That being our astrological signs. I'm an Aries, which is a fire sign, while Tom D. is a Scorpio, which is a water sign. Hence the 2 different entities making a great outcome. I've mentioned before that sex with water signs seems to make me insatiable, now I know why. Now add to that the 2nd synergy at play being from Wet® SYNERGY™ lube, then you can be sure that my ass was twitching for more, even after we were done. What probably makes Wet® SYNERGY™  work so well is because it's a hybrid lube made with both water AND silicone. Somehow this combination makes for a great outcome as well by 1st being powerful enough that it doesn't take much of it to get your action going, and 2nd, by making your dick and/or ass feel the pleasure of a slick ride. A hot and sexy slick ride that has me needing to ask....
....What will the folks at Wet® think of next? Because this is my favorite lube of theirs yet.
Posted by LeNair Xavier at 12:02 AM