As the weekend has come and gone, I'm sure quite a few of surfing the internet cruising sites like Manhunt, Gaydar, Adam4Adam, BBRT and the like know exactly why the word "type" is in quotes in the title. It is in quotes because of the many narrow-minded faggots in the American gay community whose type they have no sexual interest in is based solely on a shade of skin and/or ethnicity. Never taking the time to see what the other person looks like.
Now some of you who may have seen some of the profiles that I have online may have noticed my saying that I'm into guys of a lighter complexion. So how does this make me different than those that I just crucified? It's because while my initial attraction is to a lighter complexion out of novelty, I treat those of a darker complexion just the same by seeing their face, and taking note of what they have to say to show their intellect. Yes, I like intelligence even in a causual sex partner. Therefore, they are never out of the running JUST BECAUSE their of a darker complexion. In fact, I just recently added a 42 year-old Black guy with an amazing body on to my Dudelist at Dudesnude.com, who if it wasn't for him living all the way in Florida, I would probably be riding his cock while writing this post. For that body and what he says about himself added to my attraction and further proves the validity of my point. I had 2 such instances that happened so close to each other that I got pushed to the point of needing to address this once and for all before I explode about to where something God-awful happens.

The first of these 2 instances happened while I was bored and going through a hook-up site, and if some one tickled my fancy enough, then I would have been out the door, and on my way. One profile I came across was from a guy who initiated contact with me, and over time we've emailed back and forth with nothing coming to fruition. This time I hit him up. And while he was ready to go, he said he was with a friend who "is not into black guys". I've seen enough racist pigs like this that something in me snapped. I replied by laying into him. I may have been wrong for doing so, but I know what was driving me to rip into him was the age-old addage, "you are known for the company that you keep". You see, my ego may have been a little bruised if his friend was not into ME...this particular Black man, but I take great offense to hear that he can never see beauty in people of an entire color or ethnicity. Therefore, if you are keeping company with a generalizing racist pig, what does that say about you? Even though our online talks were initiated by him, at that moment, as far as I was concerned, he deserved a tongue lashing that would start the pain of a slow hanging while being burnt at the stake, and I would have gave his racist friend the same for living in this country and practicing such ignorance. My feeling was that if he wants to support his friend's ignorance, then feel the pain that people thinking like "his friend" caused in the past, and whose way of thinking halts our progress as a people now.

I now see that in this case, I may have overreacted. For we have no control over our friend's prejudices, BUT we do have control over how far we allows those prejudices and bigotry to go while accepting that person as part of our circle. So if that includes his friend's racism hindering his fun, then he has a decision to make.

The 2nd incident happened just a couple of days later. First off, it should be no surprise that crystal meth usage blocking one's logical thinking was involved. Anyway, what happened was that he had a group of guys over. After a night of PnP, which included my experimenting (as I have confessed to before with other drugs), we were still fooling around at his place after everyone else had left. Some time later, someone he who says is quite flakey called him up wanting to come over. He told the guy I was there. Showing his racial open-mindness, the host never told the guy beforehand that I was Black. He just gave him my screenname from a website so he could look me up, and if he was cool, fine, but if not, then I had to go. The guy's reply (as I was told anyway) was, "He's not my type."

After my incident from the other day, it's totally logical for me to become suspicious that his type had nothing to do with my physique, but my color. And I wonder was the host just choosing his words carefully in telling me that the other guy wasn't interested.

By the time I was getting dressed to leave, the other guy showed up, and went in the bathroom. Let me make clear that at this point the host knows he has a problem, because he said himself that he's not making rational decisions. This was such the case when I proved myself by an earlier incident where I was left in his home alone, and he came back with me there, and nothing missing. So while the flakey guy is in the bathroom, he's apologizing to me empahtically. And asked me, "Are you upset?"

Now, where in the apartment we were standing and the bathroom is not that far away where if you're in the bathroom and not running water, you can hear everything said outside that bathroom door. Knowing this, all that I said was said with the intent for the flake in the bathroom to hear. Displaying my annoyance with how some flakey cracked-up meth-head is being chosen over my trustworthiness. And I'm sure as for any addict, the guilt of that compounded with his motivations for saying I'm not his type probably being based on color explains how when the flakey guy came out of the bathroom, he came up with a story of how he just got a call and had to go work on a project. So off he went. The problem is that before he showed up, the host said this is classic behavior for him.

Now before any of you talk about me getting involved with these people on drugs, let me say that during that time with him, he chose me to bare his soul to about wanting to be sober. And that is why I stayed with him, but I will get more into that in another blog entry.

Back to the matter at hand, as a non-White American, you hear that bullshit of "don't take offense, it's just a preference" so many times, you're ready to do something heinous to the next fool who says it. Because it's a way or wording things to make racism accpetable, and being the wordsmith that I am, I do not appreciate someone trying to insult my intelligence....and that's putting it mildly. And even worse, it's one minority spitting in the face of another. It is saying that people who are considered ugly because of a natural occurence like sexual orientation, and continuing the chain of abuse by saying that you are not good enough to be considered beautiful because of something natural therefore beyond your control like skin color. It has gotten so out of hand that every color is doing it to each other, and it's deemed as "OK" when it's actually far from it. 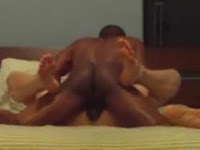 There is some form of revenge coming to me though. I see it everyday I look in the mirror, and realize how many early 20-somethings check me out having no idea that I'll turn 40 next year. I've been blessed with this beauty, because I have embraced the beauty that God made when he created the rainbow of human skin tones. 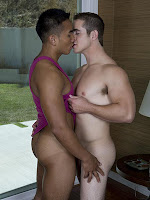 I haven't worn myself out trying to live a secular life in my romantic and sexual attractions. As I've been man enough to admit, I did at one time, but I feel now I'm being rewarded for it, because there is now a calm in my spirit.
So just how right was your white? Now that your stressed-out white skin needs Botox to try to hide the stress-lines and pre-mature aging from trying to maintain your "White-only" world, while my peace of mind by embracing all makes me need no such thing. And I know you envy me for that.
With all that in mind, I close with this message to them:
LOOK AT YOURSELF! Because I don't want to, and pretty soon, no one else will want to either, which is why you'll be buying escorts. It's called "justice".
Posted by LeNair Xavier at 12:31 AM