They Dared To UN-dress Inappropriately

I went to a sex party Friday, and evidently somebody did not read my post, "Sex Party Etiquette: UN-dress Appropriately". In fact, a few people there didn't read the post.

There was one older white guy there wearing a polo-shirt and underwear trying to check me out. I ignored his glances. There were also these 2 big black guys who for all I know may have been twins, because once I saw what they were wearing when they considered themselves undressed, they weren't worth taking notice of in my book. They were BOTH wearing black tank tops, grey cotton boxers, and white tube socks. Matching undergarments pieces - GREAT, but not for a sex party. The only difference between them was that one went even further into their lack of knowledge of sex party etiquette by wearing a baseball cap. And a baseball cap was the problem for me with another guy, who was wearing a jockstrap.

This guy with the jockstrap may fall into a different category, but he did have something that made me turn him away along with the baseball cap. He was good-looking, had a nice plump ass, and I could have easily killed 2 birds with 1 stone. I could have both satisfied his desire for me that he showed by circling me like a vulture does a dead carcass, and stroked my ego simply by using the one stone of fucking him senseless. BUT I would have had to do it "doggy-style", because (it may seem a bit "Chelsea boy" attitude) but I did not want to look at him. For the baseball cap was such big a deal for me that it can count as Strikes 1 & 2, so his beer-gut could be considered Strike 3. Like I said, it may seem a bit "Chelsea boy" attitude at that moment, but the fact is I'm no spring chicken, I AM 39 YEARS OLD. So if I can maintain my physique by not the best of diets and without going to a gym, why can't he?

Not long after, while in the lounging area, I was standing against the wall and the other twin with the baseball cap came up to me. He complimented me on my body, and I thanked him. He then asked me my age, when I told him I just turned 39. he got wide-eyed and said, "Really?! You look good!"

Well, I had to maintain my composure. Because it took every ounce of restraint to not let the blunt and brutally honest Aries in me come out and reply, "If you think I look good, thanks. But you are at a sex party, so you don't look good right now. Actually, you-look-stupid!" 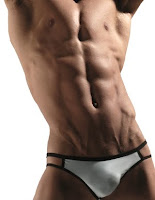 Now for the record, while I'm critiquing these other guys attire at that sex party, it is only fair to reveal what I myself was wearing. I was wearing tube socks, yes, because I was not in my own home or one that I know well, so I'm not going around barefoot. But my main attire of attraction was a pair of the Priape Wear Itcha briefs you see in the picture, but in black. So you see, I do practice what I preach.
My thought about these people is this:
If you are that ashamed of your body that you can't even get naked at a sex party, and feel comfortable in your own skin, then it's a sign for you to adjust your life to where you lose the gut you are trying to hide. And if you're not hiding the gut, don't get offended by being turned away. At least I'm not one of these gym-rats who take up with an out-of-shape person for the sheer purpose of me being seen as "The Pretty One". Because even for a tryst, your confidence and pride you take in yourself makes you that much sexier.
Posted by LeNair Xavier at 11:43 AM