He Was Dumb As A Bucket of Rocks @ Eastern Bloc

How appropriate for April Fool's Day....a tale about a fool. 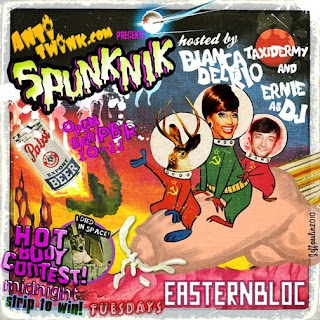 For the 1st time since he start this party, I went to check out my friend, Ernie Cote's party, Spunknik over at Eastern Bloc. There was supposed to be a Hot Body Contest hosted by Bianca Del Rio, so I was eager to see who entered. There were some cute guys. But one guy's cuteness diminished a bit when he showed how he was actually dumb as a bucket of rocks.
There were about 4 contestants all together. One contestant decided to make his 1st move to do a back-flip off of the little stage in this small bar. He was successful. He then did his dance on the stripper pole in the middle of the bar. Then the next contestant went up. When all the contestants were brought back up to choose a winner, when this one was re-introduced, his friends started chanting "Back-flip! Back-flip! Back-flip!"

I thought it was a  bad idea the 1st time he did it, but if he took that chance again, he was certified to be, in the words of Red Forman of "That 70's Show", "A DUMB-ASS!" Well, he proceeded to prepare to jump.

Simulataneously, I saw out of the corner of my eye, 2 guys come out of the bathroom. With my feeling of how disgusting I find sex in public restrooms to be, I thought, "Oh, here's 2 more dumb-asses.".

Remember, Eastern Bloc is a small space. So it wasn't far for these 2 guys to walk before being in front of the little stage. Then it happened....

The contestant tried his back-flip, and crashed into one of the guys coming out of the bathroom. So 2 dumb-asses collided, and the contestant went down with his face to the floor.

OK, so he looked around to see if he had enough room. Big deal! The fact remains, like I said more than once, Eastern Bloc is a small space. And what was on the line for the contestants to win?.....A bar tab.

Yes, you read correct - A BAR TAB. So this fool did a backflip in a bar small enough that he easily could (and did) bump into someone, wound up with his face to the floor and  a chipped tooth - ALL FOR A FUCKIN' BAR TAB. I might try that for at least $100 cash, but a bar tab, when the amount of the bar tab was never even specified?! If he's willing to take such a risk for a bar tab, then I think an AA sponsor should have been on stand-by for this guy, even if he stuck around long enough to get the prize.

And you would think since where the 2 guy met was right in front of me, that I would tried to stop it. Well, there was too much stupidity from both sides to make me think that far. You would also think that I would have some degree of sympathy for the contestant and his chipped tooth, but I don't. Because he's supposed to be a grown ass man, and he was an idiot listening to his buddies chanting for him to do a backflip. Common sense in an adult would make the equations, "Small bar = limited space. Therefore following friends chanting stupidity = I'm even more stupid than my friends."

Since I take such pride in my intellect, I never allow others to convince me to do stupid things. When I make mistakes, they are blunders born from ONLY my own lapse in judgement.

So the main idea of this story is....loving alcohol and stupid friends makes you do some stupid shit.
Posted by LeNair Xavier at 12:17 AM