From Skin Tight to WOOF! Night

This past Saturday, I went to check out the the spandex party, Skin Tight. I had fun running into a friend from Porno Bingo, and one of the hotties who works at the Baña Pool Party, who for some reason seemed more enticing in a spandex body suit at this party than he does wearing Speedos at Baña. Either way he was wearing too much for my taste, but that's another blog entry.
While I did have fun, I have to admit that there were very few Black guys there. After my last time at this party, I figured this and how covered in spandex mostly everyone else is would be the case, so I decided to come representin'. I did this by wearing something showing enough skin that it would bring so much hot chocolate brown into the room that the beauty of darker colored skin could not be denied.

It turns out that the New York Times was there as well to do a piece about Skin Tight for their style section with  a proposed publishing date of April 11th or 15th. They took some pictures that inlcuded me, but I'm sure the bulge in my tights would be considered too risque for NY Times readers....Or maybe not. We'll see.
I had so much fun Saturday, that while I initially planned to go out Sunday, I changed my mind, and stayed home. Which is good, because Monday brought a thrill not to be ignored.
Monday night, after a long abscence partly because of the Aandre drama, I returned to hanging out at Mike Dreyden's WOOF! The go-go boys for the night were Michael Xavior ( no relation) and Ricky Perez. The invite for the evening said that they were "back by popular demand". Well, ladies and gentlemen, I can see why. 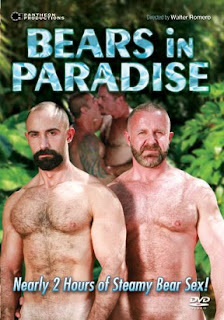 During one of the raffles of the evening, I actually won. I won a DVD of the movie, "Bears In Paradise" featuring Rusty McCann who was there at WOOF! After winning, he offered to sign my DVD. After signing the cover, we had a little make out session on the other side of the pillar Mike Dreyden was standing in front of while doing the raffle. So no one saw this HOT turning point for me, because I have never made out with a bear. That is until now ;-)
Getting back to Michael Xavior and Ricky Perez, they did indivual shows first. When Ricky got up there my main goal was to get a picture of his ass, because he has one that should be molded to make a flesh-fell pillow out of. Then Michael went up for his solo show. I went to tip him, and he was drenched in sweat, which is just how I like a man when he's working. Then he gave me a hug putting that sweat all on me----no complaints here. So if you recall my post, "Getting Out The Kinks: Step To Me - WET!", then you know I was sporting major wood after being given some of Michael's sweat to wear.
Next Michael and Ricky put a show on together was so HOT, that it was no wonder they were asked to return. And I got pictures to prove it in this slideshow. They were playing 80's music so I chose George Michael's "I Want Your Sex Part 1 & 2" as background music for time and content. So watch it this 1st time to get off....
Now watch it again, by downloading it HERE for larger and better quality, and tell me how I am as a video editor....
....and to get off again, and again, and again, and again ;-)
Posted by LeNair Xavier at 1:02 AM