Recently, I went to the website NakedFuel, and saw that they had a familiar face on their site. They featured a post about Rentboy.com's Hookie Award-winner for Best Newcomer, Jay. His pics had me do a flashback because Jay is familiar to me. You see, I’ve seen that monster cock of his up-close.

Now, I'm sure Jay doesn't remember what I'm about to tell you because it was so long ago. For me however, when you already have (reasons why I'm proudly single like) a memory as tight as a drum, AND being as picky as I am, events like this are ones you don't forget for years, maybe even decades to come. Which works well for you because I'm sure you're wondering how the privilege of such close inspection of Jay's dick ever came about. Well, you know by now that I kiss and tell a great deal on this blog, or in this case, suck and tell. 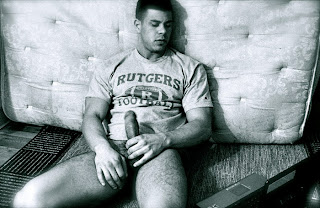 A few years ago Jay was go-go dancing at one of Daniel Nardicio's underwear parties in the East Village. He got off the bar, walked towards the back, and the guys were all over him, and he didn’t seem to mind getting felt up, and guys touching his dick and acting like they were going to suck it. I thought to myself, “Here goes American sexual repression at its finest again. The man is rock-hard because he needs a release. These guys need to stop dilly-dallying with the man's cock. If none of these guys are going to try and suck it, then I will at least try. If he turns me down, I'll take it like a man and move on”. 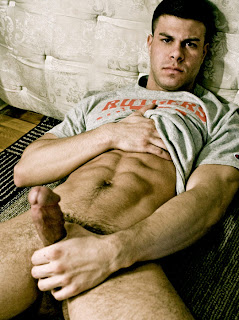 With it right in front of my face, I realized that it was bigger than I thought. It was so big that I felt my mouth stretching to accomodate its thickness. And I must have done a good job. Because while another guy came along and started sucking on him, I was standing there off on the side watching. Jay looked over and saw me, motioned his head, and mouthed the words, “Come over here.”

I would be a fool to say that I turned him down, and I am no fool. So I immediately became the envy of many by getting another go at his cock, especially because it was by his request.