Some time ago, you may remember my post, "Tyson Cane ...REVIVAL?". Well, while I haven't said much about it since, there was a fallout stemming from it by Tyson Cane. My original intent was to keep this whole thing private and not display it online. However, after my last post about Paris a.k.a Joseph Nash, and how I met Paris doing a Tyson Cane video, while writing that fun piece I kept having flashbacks to this email from Tyson Cane's that followed "Tyson Cane ...REVIVAL?", and how it made me laugh hysterically. So I thought I should share that laughter with you guys.

First off, Tyson Cane didn't send me this email to my regular email address. He decided to track me down on Facebook instead and send me an email there. I copied and pasted the email which reads as follows:

Tyson Cane January 12 at 1:45pm Report
You have been talking about me since 2007. NOW my TURN you think we are going to do this online and that's it LEON NO NO NO! You think you are such a big man well you are OLDER then me way OLDER then me you think you worked for me when you were in your 20's what are you talking about. Not only did i give you the first movie, you forgot to say i gave you the second movie company as well PIT BULL you know this because i asked if it was ok to to give PAT your info and you said thank you how dare you talk about me since 2007 i had my asst. compline everything you said about me i am not MAD i am VERY MAD. You think i am afraid of you starting a company where is your company BITCH LEON, Pat your self on your back for WHAT you have a company i need to see you have produced a movie other then be in one so cheaply Did you know i paid you less then any other model in my 10 plus years in the industry. You are so stupid it is Funny i told Pit Bull too pay you well and your response to me is talk negativity about me YOU BITCH LEON. My Turn but if you where such a big why didn't you just talk to me instead of online like some kind of SCARED BITCH LEON. MY Lawyers are going over every word you posted like some kind of scared little kid and they are planning on suing you for defamation of character one of the hardest thing to sue for but you made it so easy. I do not want to do that you have nothing i want no money etc. How is the POST OFFICE doing?
I wonder if they know you DO PORN and i wonder if they would like a person of your character going through our mail i have problem with that. Maybe i should talk my post master friend about you when i fell like it or when i wake up on the wrong side of the bed. That is not very nice

My reply was brief and to the point. It reads: 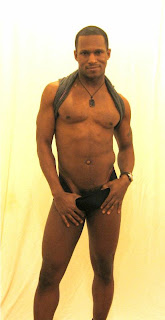 I only skimmed over this email because in the little bit of it that I entertained, nothing has changed about you. You create tales in your mind displaying your delusions of grandeur, and you still write with many spelling and grammatical errors. These acts are acts that I no longer have to try and cope with because you no longer have such a place in my life where I should spend my valuable time trying to do so. So it would be in your best interest if you were to keep your distance from me, online or otherwise. Thank you.

As I said in the email, I didn't read it thoroughly. I actually was so amused by it because of his obvious illiteracy while trying to call me out, that I forwarded it to a few friends, and when they replied to me, THEN I noticed more things that he said that I didn't see from skimming it over. None of it made the email any more harmful - to me anyway. However, he did a doozy in damaging his own image - even more than he already has.

First of all, the 1st reply from all of my friends after reading his email, be their reply by phone or email was, "Who in the hell is LEON?!"

You see, my legal name does start with an L, but it is not a common L-name like "Leon". Maybe it's like a friend of mine said that Tyson Cane may have me confused with someone else. Even if such was the case, my picture is there on my Facebook profile clear as day ----so get a fuckin' clue!

Next source of my laughter is the fact that my 2nd movie was NOT with Pitbull, but "69 Fuck Street" with Private Man-Size with Dark Alley Media as a subsidiary. My later-formed alliance with Pitbull Productions had NOTHING to do with Tyson Cane, but by way of photographer Charles Hovland of Chuckpixxx.com.

Finally, adding to my laughter is one of the things I overlooked but my friends pointed out to me. He says that his lawyers are going over every word in my blog entries so he can sue me for Defamation of Character. He already states that it's one of the hardest things to prove, yet I "made it so easy".

Did I really make it so easy for him? OR was he his own worst enemy by him making it easy to get his case thrown out?

You see for once, Tyson Cane made a correct statement. Defamation of Character is difficult to prove. However, all I did is what anyone else does when they tell of a situation. In every posts where I mentioned something that he (or anybody else) said, I told what he said, and made an assessment of what that says about his character or lack thereof. He however shot himself in the foot by threatening to tell my supposed job that I was doing porn. I say "supposed job" because I never worked for the US Postal Service, but as a Mail Clerk in a law firm. And even though he had the wrong job in mind, his threatening my employment by exposing something I'm free to do on my free-time destroys the validity of whatever case he would have tried to get into court.

Now, with everything from his tracking me down on Facebook after I specifically said in a previous email to not contact me, to his threatening my supposed job, if I wanted to be catty, I could have him blocked, cited for harassment, and maybe even all together deleted from Facebook. But I have better things to do with my time. So I will take the stand of a man, and not lower myself to the petty ways that makes one (be he gay, straight, or bi) a faggot.

With all that I pointed out, if he was smart, he wouldn't dare want to make this go beyond the internet. But then again, we are talking about Tyson Cane.

And he claims that he's not MAD, but VERY MAD. So I guess he believes that I'm supposed to be not SCARED, but VERY SCARED.