Continuing my countdown to the best 3-way of that week, it was the night of the last snowstorm to hit NYC. The snow fell during the day, and it wasn't as bad as some predicted, but it was enough to keep some from venturing out who were naive enough to believe that was really a snowstorm.
I was in the mood to go out, but didn't know exactly where. I then got a text message from a trick I hadn't heard from in awhile. He invited me out to meet him where he was, which was Barracuda. I met him there, then we bar-hopped from there to Phoenix, a friend of his arrived later, and then I decided to go to check out the asses at the Ass Wednesday contest at The Urge. My trick said he would most likely meet me there later.
There was a small crowd at The Urge, and when approached about entering the Ass Wednesday contest, I decided with such a small crowd, maybe the racism won't be so rampant, so why not give it another shot. It turns out that the racism was there, but by some miracle, I won anyway. And the runner-up was a cute White guy with a hot ass.

After the contest, I went to the bar, and wound up sitting next to the runner-up. He congratualted me again on my win, and started a conversation with me. It turns out he's a dancer (my loyal readers know that's a weakness) . He invited me to a dance workshop he was participating in, and he began a long philosophical conversation with me with him doing most of the talking. After quite a long time into it, he told me that he was straight.

Yes, you read correct - straight. And his whole routine of playing to the crowd and poking out his hot dancer's butt was just him being a performer, and giving the crowd what they wanted. By the time he revealed his heterosexuality, I was listening close with him constantly grazing me, which gave me the nerve to slowly stroke his side in return, but he didn't seem to mind. In fact, he was so into his conversation that he let his friend who was with him leave without him so he could continue talking to me.


He did get more in depth to explain his considering himself "straight". He said that he's pretty open sexually, but romantically speaking, he's straight. However, that sexual openess has never had him have anal sex with a guy before. I did understand his explanation, because it's the opposite of what I say with my bisexuality. For I have had and can still have sex with a woman, but nothing more than lust will be my motivation, but it is a man who can get the combination of lust AND my loving heart.
My trick did eventually make it to The Urge. I lost him various times, and figured by now, he had gone home. It turned out that he didn't. He came to me and the straight guy and invited us back to his place. The straight guy asked if my friend had any kind of "party favors", and my friend said he did. So off to my trick's place we went.
My trick and the straight guy did a couple of lines of cocaine. And I will admit, in my constant curiosity as to why people do drugs, I did do a couple of lines as well. And since my curiosity was as satisfied as it needed to be, so I was done with cocaine. Because while they may have a need to escape their lives, I don't. Therefore drugs serve me no purpose. My trick and the straight guy however did more. Soon after, we all started getting naked, and going down on each other. Mainly me and the straight guy, because I later realized my trick's idea for bringing us back to his place was more about him watching me and the straight guy fuck, than it was about him being part of a 3-way.
I wasn't the least bit high as far as I could tell except for my lack of a hard-on like everyone else in the room. I can still recall all of my actions, and cannot sight one thing out of character for me except my taking in the drugs in the 1st place. So once we took the nakedness into my trick's bedroom, because of my experimental dose of coke (for all I know, I didn't even snort it properly) I quickly got back my hard-on. So I had the cock everyone wanted to play with, which led the straight guy to ask my trick if he wanted me to fuck him. My trick said yes, so I got a condom and pounded my trick for a good bit. My trick and I then looked over to see the straight guy was slowly getting hard from watching us. So I knew it was my ass that was going to be sacrificed to engulf the straight guy's thick cock.
I knew I wasn't topping the straight guy, not only because he said so, but because I didn't want to, so I wasn't even going to suggest trying it. Because I wanted to see if he was as sexually open as he claimed, and if I could be the man to finally get him to go all the way with this sexual openess that he claimed to have, and possess the 1st guy's hole that he pokes - even for a little bit.
Well ladies and gentlemen----MISSION ACCOMPLISHED! 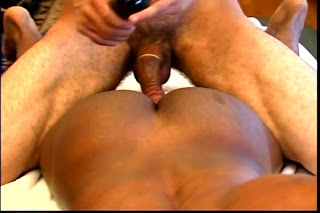 I did get to to feel his hard cock inside me, but it didn't last long. Later on we tried again. This go-around, he said, "You're hot as fuck, but you're just the wrong gender."
I strongly doubt that. I think the cocaine still had a hold on him. But over time, it was starting to lose its hold, which is why the 2nd try of him fucking me lasted longer and more intense than the 1st.
After seeing how far the straight guy came by making me his 1st gay fuck, my trick and I jerked off, and then all 3 of us fell asleep.
When I woke up that morning, it was only me and the straight guy in the bed. I actually got out of bed, looked around for my trick to discover he left us in his apartment all alone. I got back in the bed, and took some advantage of the situation. I knew the only reason the straight guy came to my trick's place was because he had cocaine - something to free his inhibitons of the experience that he wanted to have with me.  So I felt with my trick gone, the straight guy would be more at ease. So in taking some advantage, while the straight guy was sleeping on his side, I started feeling him up by massaging his ass, then started playing with his cock. He started to turn over onto his back so I could do more, and I started sucking his cock. His cock got so fuckin' rock hard, if I thought to take full advantage I would have put a condom on him, straddled him, and rode his cock until he filled it full of his man-milk. Instead, he filled my mouth with his man-milk as his muscles in his dick's shaft contracted from me sucking his dick. I didn't swallow, but to go that far proves that I am the cum-pig that I said I am.
Please do not misunderstand this post. After all the noise I've made about gay-for-pay, I am by no means being a hypocrite and advocating recruiting straight men. I am not Jet Set Men's Chris Steele (who I hope has gotten off that subject of seducing straight guys by now). Every action done between me and that straight guy was an action that he knowingly put himself in the position to make happen, and was OK with letting happen. And because of that willingness, I have no problem with the outcome, except for the drug use involved to make him do it....but that's another blog entry.

For I don't need drugs or alcohol to have sex with a woman and revel in the small part of me that is straight. Yet it took alcohol and drugs to make this guy explore his gay side. Therefore, it's fair to assess that he's not all that comfortable with his bi-sexuality or bi-curiosity, but it's not my job to push that fact upon him. That's something he must come to terms with himself in due time. Which is why I never corrected him when he said that he doesn't kiss guys, yet he kissed me twice. Not open mouth, but still----our lips met. So as far as I'm concerned, I'm totally comfortable with him calling himself "sexually open", but romantically speaking, he's "straight".
Posted by LeNair Xavier at 8:55 PM